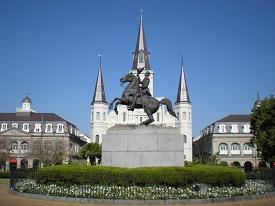 The nuisance ordinance states that any monument should be removed if it "suggests the supremacy of one ethnic, religious, or racial group over any other." It seems that Jackson was a slave owner and did not treat American Indians well. According to Marksbury, "He signed the Indian Removal Act when he was president of the U.S. That resulted in more than 4,000 deaths of peaceful Native Americans. He confiscated 25 million acres of their land which became cotton fields."

Today’s history revisionists don’t care that Jackson saved New Orleans, fought for his country and served two successful terms as President. All they care about is how he treated oppressed minorities of his day.

As Marksbury notes, problems arise when today’s politicians “re-examine and analyze historical figures by contemporary values.” This unnecessary and ill-advised fight was promoted by New Orleans Mayor Mitch Landrieu. Without doubt, it has divided New Orleans and stands to seriously damage the reputation of the city as it prepares for its tri-centennial celebration.

While these discussions were taking place, more criminal mayhem was occurring on the streets of New Orleans. In just the last two days, patrons at the Indywood Theater on St. Claude Avenue were robbed and the renowned Maple Street bookstore was robbed by a man wielding a knife, marking the first such incident in the 52 year history of the business.

Of course, in addition, citizens were robbed, raped and killed, nothing out of the ordinary in New Orleans. The “Missing in Action” Mayor has shown zero leadership on the crime issue. Instead, he is too busy launching another round of midnight basketball and campaigning for the causes he cares deeply about: Hillary Clinton, climate change and monument removal.

While some citizens may react in horror to the idea of removing the Jackson statue, a group of left wing activists, “Take ‘Em Down NOLA,” are very supportive of such a move. In fact, they want many more statues removed such as the one honoring the founder of New Orleans, Bienville.

In his remarks yesterday, Marksbury outlined a list of other statues that could be removed under the wording of the nuisance ordinance. He cited the Winston Churchill statue and the Buffalo Soldiers monument as examples. The politically correct agenda could also include renaming the Roosevelt Mall in City Park, since former President Franklin Roosevelt interned 110,000 people of Japanese ancestry, mostly American citizens, during World War II.

Other street names such as Jackson Avenue, Jefferson Avenue, Bienville Street to name only a few may have to be changed if the nuisance ordinance was strictly followed.

The Mayor and six members of the City Council, with Head as the only opponent, used a poorly written nuisance ordinance to engage in politically correct, history revisionism. As the case lingers in court and no contractor has been identified to remove the monuments, citizens have a right to ask when this distraction will end and when city leaders will start to focus on the serious problems facing New Orleans.