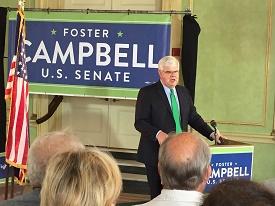 Pubic Service Commissioner and Candidate for Governor Foster Campbell held an event to announce the launch of his website, other digital content and to provide specifics of his campaign platform Wednesday. Campbell was recently endorsed by Governor John Bel Edwards.

Campbell's campaign website is at www.fostercampbell2016.com. Campbell simultaneously released a campaign launch video which can be viewed by clicking the image of the video below.

Today, the Louisiana GOP sent out an alert to its members concerning the sanctuary cities legislation being considered at the legislative session, in Baton Rouge:

The legislation against sanctuary cities could be jeopardy. We need your help today to ensure criminal illegals are not conferred more rights than you and me.

The Senate Judiciary A Committee has deferred a hearing on HB 1148 (formerly HB151) by Valerie Hodges to next Tuesday. If you think protecting our communities is more important than shielding criminal illegals, take action!

Democrats are trying to remove the teeth of the bill by eliminating the penalty portion. This would make the legislation completely ineffective.

Your elected officials must know that you do not want your hard-earned tax dollars funding sanctuary cities.

Federal law plainly states that it is “a felony to encourage or induce an alien to come to or reside in the United States knowing or in reckless disregard of the fact that the alien’s entry or residence is or will be in violation of the law.” Despite the threat of up to five years in prison, city officials are still enacting sanctuary policies. An additional state criminal charge will not deter them.

Join us, our Republican leaders in the Legislature and Attorney General Jeff Landry in this fight for the rule of law.

Call your Senator and sign the pledge to say NO to sanctuary cities.

Louisiana Attorney General Jeff Landry will speak to the Press Club of Baton Rouge on Monday, May 23. Landry will discuss the state budget and legislation aimed at giving his office a separate budget. Press Club meets on Mondays at the Belle of Baton Rouge Hotel, which is located at 102 France St., in the East and West Baton Rouge Room. Parking is free in the garage off Mayflower Street. Lunch, which is served at 11:30 a.m., is $13 for members and $17 for nonmembers. The public is invited, but only members of the Press Club and the news media are allowed to ask questions during the question-and-answer portion of the program. Like the Baton Rouge Press Club on Facebook.

The Advertiser newspaper has launched a blistering attack against certain Republican leaders for their actions these past few months.  The newspaper, which said it supported a Jon Bel Edwards’ opponent in the recent governor’s race, specifically criticized Lt. Governor Billy Nungesser (and by implication, GOP Chairman Roger Villere), House Republican leadership, Cameron Henry, the House Appropriations committee,  Attorney General Jeff Landry and others.  The article title? GOP, Rein in your partisans

The opinion ended with, "This newspaper endorsed a Republican candidate for governor in 2015, but this editorial board recognizes that our new governor is honorable, decent and well qualified to lead Louisiana. Louisiana voters apparently thought so, too, because they put Edwards into office by a comfortable margin.

There are still state leaders, some Republicans included, who recognize that Louisiana voters need results from Baton Rouge, not raw, partisan, poisonous excesses. It's time — no, past time — to let reason reign."