Is The Real Donald Trump Really a bigot? Part I 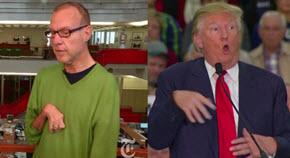 Is The Real Donald Trump Really a bigot?

My answer is, if Trump always walks, talks and acts exactly like the textbook definition of a bigot…  yes, he must be a bigot !  And more.

However, before going any further, let us take note of the obvious.  There is no doubt Trump has African-American followers, evidenced by the candidate's recent and remarkable campaign utterance, "Look at my African American".  And. his older daughter Ivanka is married to an orthodox Jew and she converted to Judaism.  Trump the crony, has contributed to political campaigns of varied gender and race.  Also, Trump has many devotees of various ethnic, race and religious groups. So, how in the world could anyone in their right mind call Trump a bigot?

In June 2015, Trump first announced his run as a candidate for the presidency using blatant ethnic rhetoric directly targeting Hispanics. This is historical fact. True, by comparison, he does not have a history of selling racist books out of his campaign headquarters, similar to David Duke, while he was running for office and as an elected official.  Yet, it is becoming so vividly clear that Trump is a racial-religious-ethnic bigot and not just any populist politician making random hate remarks and walking them back under media scrutiny.

As will be discussed further in a upcoming column, Trump is a leader of a new hybrid of bigotry suddenly seen in today’s social media mixed with an under-girth of vitriol, given a very loud internet platform - even if it happens to be one of hate speech and invective!

The latest incident of bigotry involves Trump University and California Federal Judge Gonzolo Curiel which demonstrates the coup de grace of verifiable evidence in a confirmed sequence of documented events.  At its core, we need to ask ourselves, why was it necessary, while on the campaign trail, for Trump to bring up the Judge’s heritage?

Trump injected ethnic bias into attacks on Curiel back in February. He told the crowd at a rally in Arkansas, “there's a hostility toward me by the judge — tremendous hostility — beyond belief. I believe he happens to be Spanish, which is fine. He’s Hispanic, which is fine."

So, it is evidenced, when the Trump University lawsuit first was mentioned, Trump appeared to stumble, calling the judge “Spanish or Hispanic?”  However, this insertion to the narrative talking points was no accident. He was paving the way by serving a ‘plate of red-meat dog whistles’ to those prone and willing to accept national differences as a subtle and unspoken justification  separating "us" versus "them".

This manner of speech provides us with his talking point which he notably seems to be placating by saying it is fine.  But, no, it is not really fine. This is just Trump ramping up for more stepped up attacks and blows at his target opponent — who happens to be in this particular event, a federal court judge presiding over a class-action lawsuit against one of his companies! This is textbook Donald Trump. http://fortune.com/2016/06/02/trump-organization-lawsuits/

The answer, in my view, and the only possible explanation that makes sense is he wanted the already-angry voters (and yes, some Mexican haters) to align emotionally with his candidacy which also serves to his personal benefit. I strongly submit Trump thinking process was essentially—“I am being accused of fraud, the Judge is Hispanic, I think he is against because of political decisions AND I want to diffuse possible concerns with American voters about this controversy upon my candidacy. Trump had already called out Mexicans saying, the ones here were the worst Mexico has sent over… but later suggesting how there might be “some good ones.”  Trump’s way of thinking is why not throw out the Judge’s heritage since it will distract voters from the attacks against him?  Doing so, would be a no-brainer."

Let’s bear in mind, Trump did not need to mention the Judge’s nationality at all.  He could have simply said, “I think the Judge has made some bad calls” … or, “I think we are going to win” to cover his own defense.  However, he brought up the nationality without providing any other supporting facts or evidence of bias, other than, the Judge is one of "them"! Here we see CNN Jake Tapper’s interview asking him about racism and we can see how far Trump veers from fact into the realm of fiction. http://www.cnn.com/videos/politics/2016/06/03/donald-trump-hillary-clinton-judge-jake-tapper-full-interview-lead.cnn

What makes Trump's most recent collision with bigotry so startling is the obvious motivation for his statements.  They were not spoken in the framework to advance the political and social causes of trying to fix this nation's problems.  Instead, it was bigotry at its very worst.  He engaged in ethnic hate speech to advance his own selfish protection of his personal reputation and his wealth.  While the federal Judge is ethically bound not to speak up to defend himself to these types of charges, Trump has chosen not to follow the  process of filing a motion to recuse but to cowardly attack the Judge extra-legally in one of the most offensive and outrageous assaults upon our judicial system.  This has been personal and political selfishness wrapped into a horrendous package of hate and abuse of the legal process.

We have watched the 24/7 political reality show of Donald Trump prove how he has had many events of going over and beyond the ‘racism’ line (or as Speaker Paul Ryan has just mentioned, "beyond the pale") in this election cycle. We will discuss these further in Part Two of this series examining the questions of constitutional principle vs nationalist populism in American society and its reverberations into the mainstream culture.

So, is Donald Trump, a bigot and dangerous?

More in this category: « Nothing confederate about Politics with a Punch humor, discussions tonight The game of prosecutor misconduct in Louisiana »
back to top