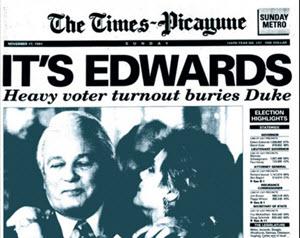 And, of course, there is his well-known background with the Ku Klux Klan where he at one time was the Grand Wizard.  When he ran for governor against Edwin Edwards in 1991, it provided the opportunity for one of Edwards’ most famous quotes:  “The only thing we  have in common is we’re both wizards under the  sheets.”    After getting 43% of the vote against veteran and powerful Democrat U.S. Sen. Bennett Johnston in 1990, Duke’s entrance into the  governor’s race shook the state and the nation.    It was called “The Race From Hell,” and it took a statewide coalition of leaders from both parties and independents to convince voters to “Vote for the Crook.  It’s Important.”  Still, Duke wound up with 39%.     But as far as Republicans are concerned, David Duke is no laughing matter.  They are making every effort to distance themselves and have him excluded from any of the Senate forums.  Duke raised the GOP’s ire when he claimed that he was the creator of the current Republican Party.    Particularly upset with Duke’s re-emergence on the political scene are the supporters of Republican presidential nominee Donald Trump.  Not surprising.  Duke said he was inspired to run for the U.S. Senate after hearing Trump’s acceptance speech.    Duke further claims that Trump’s ideas are the same as the ones he has been putting forth for decades.  “I  thought, wow, here’s a man embracing the core issues I have fought for my whole life,” Duke said.    Steve Sabludowsky, who publishes the popular website Bayoubuzz.com, got some blow-back when he reported on Duke’s candidacy and published an interview with Tyler Bridges, who is a freelance  reporter for.the Washington Post, Politico, and the Baton Rouge Advocate.    Sabludowsky noted that Trump supporters were angry and abusive in criticizing him for writing about Duke and Trump. He published a great response on his website on July 26, which everyone should read.    Those Trump supporters are apparently trying to emulate their nominee by intimidating the news media and denying that Duke says Trump’s ideas are the same as his.  It won’t work.  The similarities are there and need to be reported.    So, it will be interesting to see how many votes Duke will take away from the other Republican candidates in the U.S. Senate race.  The consensus is he will affect the campaigns of U.S. Rep. John Fleming  and retired Colonel Rob Maness, the two most conservative of the GOP slate.    Some political analysts believe that Duke is no longer viable and will receive only a few votes.  But, obviously, the Republican Party is not taking any chances and no one should underestimate David Duke.    If he does manage to pull some votes, it will further dilute the vote that the frontrunners will receive.  That could be good news for the Democrats, who are expecting that one of their two major candidates, likely Public Service Commissioner Foster Campbell, will wind up in the runoff against the top GOP vote-getter.