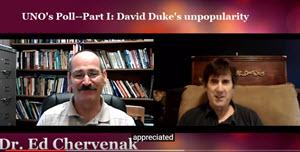 For those concerned about the future political strength of David Duke, as of now, don’t worry.  He is a losing candidate, a non-entity, yet, he is a candidate that will draw votes and will hurt one or two of the major candidates.

This summarizes the Bayoubuzz interview on Monday afternoon with Ed Chervenak, Professor from University of New Orleans, who discussed the new poll which focused upon the current political status of Duke and the ongoing political temperature of Louisiana Governor John Bel Edwards.

Below are parts I and II of the Facebook Live interview.  To read the transcript, simply click on the CC (closed caption) on the video player, should it not appear immediately.

Here is an overview of Part I

UNO was interested in looking at his unfavorabilities and likeliness of people wanting to vote for him in the primary.  Also, the poll ascertained whether people would vote for him if he ended up in a runoff against the Democrat.

The poll found that overwhelmingly people have an unfavorable view of by 6-1 margin. The unfavorable ratings across the board throughout the state regardless of any demographic category are essentially the same in terms of gender, race, party identification, region and education.  A minimum of eighty percent had an unfavorable rating of Duke and that they overwhelmingly said they would not vote for Duke in that primary election.  The poll only looked at Duke and no other candidates.

Republicans and democrats basically pretty even across the board, with the Republicans at about fifteen and Democrats at ten percent, so, there wasn't a whole lot of variation across those demographic categories and so there there's no kind of one particular group that's out there supporting David Duke.   However, the only exception is that he did have a much larger percentage who would vote for him (25%) in Congressional District Five, which was a stronghold for him before.

He did worst in Cajun Country and in District two, which is strongly African American.

In District 1, the most Republican district, the one that contains St. Tammany (his own district),

There was a complete rejection of a David Duke.  In fact, the GOP party in St. Tammany has just rebuked him along with the State GOP.  Chervenak he understands the state party is trying to create rules that will prevent a Duke-type candidate in the future.