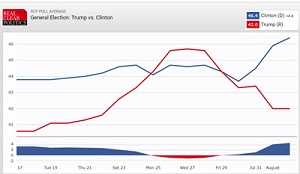 So, who is winning the convention poll sweepstakes?

With a flurry of polls that have come out since the Democratic Convention in Philadelphia, it looks like the Clinton camp has a slight advantage.

Going into the Republican Convention on July 17, using the Real Clear Politics average (which admittedly, is not a scientific way of evaluating the poll information, but is accepted as an informal method) , Hillary Clinton led Donald Trump with a slight three-point advantage. After the GOP convention, Trump actually held a one-point advantage. However, now, that advantage has turned to a Clinton advantage average margin widening to 4.4 %. Thus, the differential, at this point, is a 1.4 percent advantage.

Here is the link to the individual polls from RCP.

On Monday, prior to the release of the polls, Bayoubuzz publisher Stephen Sabludowsky discussed the post-convention bounces with JMC Analytics of Louisiana pollster John Couvillon.

At the time of the online video interview using Facebook Live, Couvillon opined that based upon the limited poll information at the time, he believed that the poll results would show basically the same margins going into the convention as coming out of the conventions.

Couvillon also explained the approach he takes in analyzing the poll numbers.

Watch part one of the Bayoubuzz interview with pollster John Couvillon and the closed caption transcript of the interview.