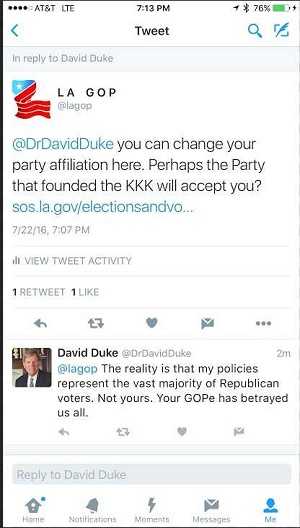 According to Dr. Ed Chervenak, Professor of Politics at University of New Orleans, David Duke is highly unpopular, based upon a recent poll administered by Chervenak and that department.


How unpopular? And if he is so unpopular, why study him with a poll?


Stephen Sabludowsky, Publisher of Bayoubuzz, asked Chervenak to put the low numbers in perspective, compare them to stats we see from other candidates and other politicians.  Sabludowsky, who has received criticism from Trump supporters for writing about David Duke's candidacy, asked Chervenak UNO was just giving the far-right-wing US Senate candidate unnecessary attention.

(Watch the interview which includes closed caption transcript).  If the transcript does not appear, click on the CC button)

He also  Here is a summary of Chervenak’s responses:


Hillary Clinton and Donald Trump are also unpopular but they have a base of support that won’t fall below 40 percent.  Chervenak said that Democrats and Republicans are both and independence basically expressing their distaste for David Duke.

On a national scale, the parties tend to give their candidates the benefit of the doubt.   Job approval ratings for the president right now, Democrats think President Obama is doing a great job, Republicans think he's doing a terrible job.  Even though he was viewed as being a popular you never really fell below forty five percent approval; Democrats stuck with him but we're seeing here,  Republicans in the state defect from David Duke and that's why you see you know strong the very high unfavorable numbers.

Regarding whether UNO is giving Duke more media attention for polling the public, here's a summary of Chervenak’s response:

The professor said when Duke announced his candidacy, Chervenak got an email from his grad assistants--is it time for a Duke poll?  They wanted to get a sense of what people thought about David

Duke candidacy today—for them, it's an academic exercise.  It's not like they had an agenda .  It's

important you know,  this is not someone that you can ignore even though his ideas are odious and even though he puts in Louisiana into the negative light and attracts all this attention for all the wrong reasons.

The result is basically telling David Duke—“you've got a long way to go if you expected you get any kind of the real support in the upcoming election”.  “He's just so far underwater that it's hard to see any prospects of success in the election”.

More in this category: « Crouere: Donald Trump vs. The World, and Clinton Couvillon talks NFL-Prez. Schedule flap and Trump, Clinton debate risks »
back to top