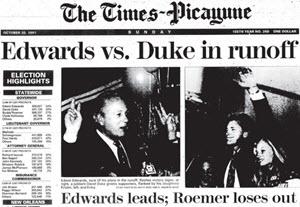 No matter how hard Louisiana tries, it just cannot shake entanglements with David Duke.  Some would call it a noose.  But whatever, Duke is back gaining a lot of press as a candidate for U. S. Senator, as 24 candidates vie for the distinction of replacing retiring incumbent David Vitter.  Duke has been a controversial and perennial candidate for years. So is he a has-been, or does he have any shot of representing the Bayou State in Washington?

With so many candidates in the running, it’s possible that less than 20% of the votes cast could get an aspirant in the run-off.  Back in the 1972 gubernatorial election, future U. S. Senator Bennett Johnson made the run off with only 17% of the vote, and at that time, only 17 candidates were running.  Duke is currently close to that number in several recent polls.  In a University of New Orleans poll, "When asked if they would vote for Duke for the U.S. Senate in the upcoming primary, only 13 percent of respondents said they would cast a ballot for him".  However, the poll only measured Duke's popularity and did not mention any other of the 24 candidates on the ballot.

Duke no doubt is helped by rhetoric coming from the Trump presidential campaign, that espouses disaffection with the federal government, as well as anti-immigrant and anti-free trade issues.  “We want our country back” will be the mantra of the Duke pomposity in the weeks to come.  So don’t sell Duke short.  He does have a following. Some 14,000 followers on Twitter. Treasurer John Kennedy, who currently leads the race in most polls, has 3,487 followers, with Congressman Charles Boustany showing 1,178. This is one small indication, but Duke does pique a great deal of interest. Much of it negative, but a surprising amount of positive.

I observed the Duke phenomenon up close back in 1991, when I was a candidate for the post of Insurance Commissioner.  Duke was the challenger to incumbent Governor Buddy Roemer in a crowded field of 15 candidates that included former Governor Edwin Edwards.  Roemer had defeated Edwards in the 1987 gubernatorial election, and Edwards was trying to turn the tables on his nemesis that bounced him from office. David Duke was an afterthought until the final weeks of the campaign when he shot ahead of Roemer to make the runoff. Then the fireworks began.

Louisiana became the focus of attention across the nation. Reporters worldwide flocked to the Bayou State to cover what they considered to be a bizarre election. Both candidates had high unfavorable ratings. Sixty percent disapproved of Edwards, while 66% had a low rating of Duke. Could it be possible that the next governor might be the former head of the Ku Klux Klan?  Duke told voters he no longer was anti-Semitic, had renounced racism, and was a born again Christian. A large number of white voters bought in.

I watched a part of the saga unfold one evening in Breaux Bridge, Louisiana, at Crawfish Town, a popular local restaurant.  I was there with my family and friends, when Edwards walked in.  He worked the crowd and called many by name.  This was his territory.  Then, the door opened and in walked Duke with a large entourage.  We all three were on the ballot, and exchanged pleasantries in the middle of the restaurant with every eye in the place watching.  Each candidate went to different tables, and then the receiving lines began.

As Duke and Edwards sat eating crawfish, many of the diners made their way to the tables of both candidates to share a few words. Particularly in the case of Duke, a large number of folks visited for a bit, then handed over to him tens, twenties, and a large number of hundred dollars bills. There were loud cheers when he got up to leave the restaurant.   Duke ended up losing the election to Edwards, but he was able to garner 55% of white voters.

Yes, that was back then.  Most political observers feel there is no way David Duke could emerge and make the runoff for senator.  Many of these same pundits said the same thing about Donald Trump getting the Republican nomination.  When you say that anything can happen, sometimes it does. After all, there’s a long campaign ahead before November 8th rolls around.