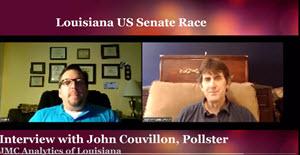 With 24 candidates running for US Senate, with only a few able to really gain any real traction, what can the state expect as we move into Labor Day, which some call, the official start of the campaign?

The first topic of discussion, raised by Couvillon was David Duke and the crowded field.

Here is a rough summary of the Facebook Live conversation.  Below is a video of the discussion:

David Duke's role in this election will be sucking the oxygen out from the minor candidates—he is a 5 to 10% candidate, who can't make the runoff but can wreck other candidates careers if they are trying to ascend into the second or third tier, trying to be a viable candidate.

One mistake that is fueling the David Duke hurricane is that the Republicans are making mistake in making him attention, going through the motions of censoring and denouncing-the better choice would be to not give him the oxygen that he wants.

That is what the Democrats did in past.  The GOP are giving him attention by giving him sympathy which will increase his percentage more to 10% rather than 5%. He has not been a politician for while some of the luster has worn off and some people don't even know who he was. He has not been shy to make anti-Semitic  utterances lately but one question that really should be raised is--what is his Louisiana presence. He's been off to Russia and other countries not around Louisiana and doing Louisiana things which is similar to what happened with John Breaux who was running for governor a decade ago. The question was whether or not he lived in Maryland or Louisiana and that might be a question of challenging his residency. There are other factors out there that could be applicable to Duke, just a different angle that should be explored.

I have done some polling and that was the Campbell has the stronger infrastructure then Kellan Fayard and Josh Pellerin. On Republican John Kennedy is a front runner and Congressman Fleming and Boustany are strong candidates. Since Kennedy is perceived top dog, obviously his competitors are gonna go after him. Then everybody else will crowd the field.

I have a feeling that a small percentage of the vote are place holders in terms of who shows up on the ballot in terms of alphabetical order. This Boustany and Campbell mes ashow up higher on the ballot and depending upon how many ballots you have, a very crowded ballot in 24 candidates, people will have to make quick decisions as to who they are for and so a candidate higher in the ballot is at an advantage.  Will be interesting to see how  of the TV ads start terms of who attacks whom.