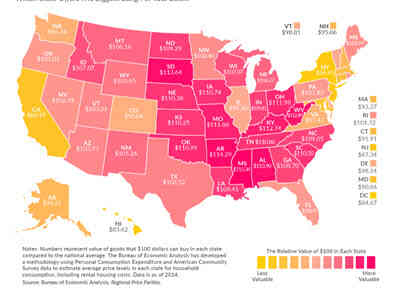 How much will your $100 bill last you in Louisiana, compared to elsewhere USA?  How far can you go with your shopping?

The Tax Foundation reports that it should go far.  Not as far as inn Mississippi and certainly much more of a distance than D.C. and Hawaii.

According to the Foundation:

"This map shows the real value of $100 in each state. Prices for the same goods are often much cheaper in states like Missouri or Ohio than they are in states like New York or California. As a result, the same amount of cash can buy you comparatively more in a low-price state than in a high-price state.

The Bureau of Economic Analysis has been measuring this phenomenon for two years now; it recently published its data for prices in 2014. Using this data, we have adjusted the value of $100 to show how much it buys you in each state."

According to Michael Hecht of GNOInc, New Orleans international tourism is booming.

Here is his report:

New Orleans' international travel grew 37% in 2015, according to figures released July 28 by the National Travel and Tourism Office, which is part of the United States Department of Commerce.  This represents the biggest one-year increase of any major U.S. City.  Behind New Orleans, Seattle and Dallas saw the next biggest increase in international travelers, the report said.  In other recent news:

·      In May, In May, more than 1 million visitors traveled throughLouis Armstrong New Orleans International Airport, the largest single-month tally in the facility's 70-year history

You can read more here.