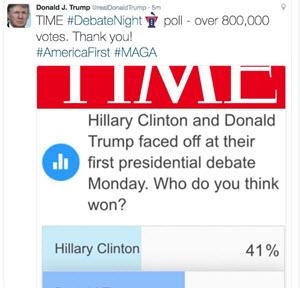 Talk about rigging the system and voter fraud. Or, perhaps worse.

Donald Trump, his campaign and some of his ardent supporters want America to believe that he was the overwhelming winner of Monday night’s presidential debate.

There are important issues related to these so-called "polls" and Trump's promotion of them that needs serious analysis.

On Tuesday, the Trump campaign pushed its version of the post-debate results claiming they were the winner of the first debate.

When I first heard that Trump supporters were giving the online polls credibility, I wondered, are they mad?  Are they referring to the same debate I saw and that CNN reported in its own scientific post-debate poll?

Clinton was declared the winner by a landslide—62% felt she won, compared to 27% favoring Trump’s performance.  Apparently, 11% were undecided.

The others online variety are not polls at all, but surveys.  They are self-reporting, voluntary, inaccurate, unscientific--surveys.  Those knowledgeable about the survey participate if they want. Those unknowledgeable about them, obviously, don't.  In fact, some of these surveys allow people to vote more than once.  Other Internet surveys are designed that if you remove the online cookie, you can vote as often as one might desire.  There are other methods to destroy all semblance of survey credibility.

Believing that a single online survey could be as accurate as a scientific poll from a legitimate media network like CNN is either engaging in wishful thinking or is simply delusional.

Unquestionably, the evidence shows that the Trump supporters knew about the polls and promoted them.  Obviously, there were legitimate votes from those on both sides and even from those who might be undecided.

However, there appears to be an unseemly side to the false proposition that Trump won the debate because he won those surveys.   The results were not only unscientific, therefore, and inaccurate but, apparently there was a tremendous amount of Internet rigging, too.  There is evidence that the Trump supporters inundated the surveys in greater numbers, therefore, making them even more unreliable.  As various media outlets are suggesting, we’re talking about an online voting fraud of a disturbing kind.

As reported by the “Daily Dot”:

You may be getting trolled right now without even knowing it.

The efforts originated from users of the pro-TrumpRedditcommunityr/The_Donaldand4chanmessaged boards, which bombarded around 70 polls, including those launched byTime,Fortune, and CNBC.

Even some online news organizations admit the post-debate discrepancies.

“Online reader polls like this one are not statistically representative of likely voters, and are not predictive of how the debate outcome will affect the election,”Time.comwrote in an online disclaimer. The Time poll shows Trump won 56-44 percent with 1.8 million responses.

“They are a measure, however imprecise, of which candidates have the most energized online supporters, or most social media savvy fan base.”

“At least one of the polls appeared to be an outright fake: The Drudge Report and a number of Trump supporterslinked to a supposedABC poll showing that Trump won 54% of the vote and Clinton just 10%, but the poll was hosted by a site that mimicked ABC’s website.”

Based on a number of posts on Twitter, the anarchic online community 4chan, and online message board Reddit,it appears as thoughInternet trolls ganged together to try to rig the online polls by using a number of tricks to game the results so that they would show Trump as victorious.

4chan, in particular, has a large “alt-right” community that is responsible for a number of racist pro-Trump memes,including Pepe the Frog. And Reddit users have been involved in rigging online polls before, including a poll byTime (which likeFortune is owned by Time Inc.) in 2009 for the most influential people in the world.

That poll was manipulated so that4chan founder Christopher “Moot” Poole would win first place. And in addition to doing that, the trolls from the site rigged all of the top 10 so they would spell the code word “marblecake.”….

In the past, Reddit trolls have used fairly sophisticated bot-nets made up of hundreds or even thousands of computers to game the results of online polls. In some cases, such polls can also be manipulated by changing browsers or simply using multiple devices and email accounts.

Which all raises the question as to Trump’s own involvement in what arguably appears to be a total bogus campaign lie.

During the Republican primary, shortly after some of the debates, Trump cited the online polls, claiming he was winning.

He did the same Monday night right after the debate’s completion.  He cited the online surveys show he is winning.  Obviously, there is a trend that Trump is relying upon these surveys and wants others to do so too.

Yet, did Trump back off of his claim that the online polls should be believed over a scientific one?  No.  Trump continued to repeat the false narrative.

As reported by CNN:

"We won every poll. Virtually every poll," he told supporters Tuesday afternoon, challenging the media consensus that Hillary Clinton prevailed.

Trump also promoted eleven of these so-called polls in a tweet, calling his wins in them "such a great honor."…

Unhappy with the results of CNN's scientific poll, Trump criticized the network on Twitter, on Fox and at a campaign event.

"We won virtually every poll. Except for CNN. And nobody watches CNN," he said.

Trump did not state that the CNN poll was scientific but the online surveys are not.  Nor did he mention any effort to tamper with the process already completely undermined as legitimate polling results.  Trump has often told his supporters that he would not lie.  However, the evidence is so overwhelming that the online polls are bogus when compared to the scientific results, that it raises three possible scenarios:

Trump is intentionally using the online surveys to create the impression of his success in the polls.  If so, the man whose campaign motif is "the system is rigged," is playing a major role in gaming that very "rigged" system.

The second, and possibly more frightening possibility:  Donald Trump is so ignorant about important facts such as--online polls are equivalent to scientific ones--that we can hardly rely upon his judgment.  The third?  Trump is so gullible and eager to accept and promote any bit of information that supports his preferred "world view", that he is a greater danger to the nation than some might suspect.

If Trump is willing to believe and to push junk polls because it makes him feel good, no telling how our enemies will game him in the future.

You remember.  After Putin said Trump was a talented person and the leader in the republican primary, Trump responded:

"It is always a great honor to be so nicely complimented by a man so highly respected within his own country and beyond," Trump said in a statement. "I have always felt that Russia and the United States should be able to work well with each other towards defeating terrorism and restoring world peace, not to mention trade and all of the other benefits derived from mutual respect."

We all now know how easy it seems to fool him--say something nice about him and watch him respond in kind.  he just might call you "great".

None of these prospects are very appealing.

Actually, they're all quite frightening.

More in this category: « Of course, Donald Trump won the Presidential Debate, just ask the Fact-Checkers New Fleming poll, showing his tie for top in US Senate Race, a big surprise »
back to top