New Fleming poll, showing his tie for top in US Senate Race, a big surprise 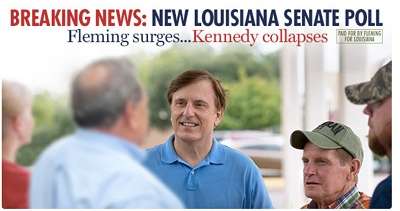 On Monday, JMC Analytics and Polling sent out, by email, a poll which it also published on its own site that reflected some pretty surprising, if not, shocking news.

Skyrocketing to the top of the polls were Public Service Commissioner Foster Campbell (D), and Congressman Charles Boustany (R).  Snuggled in that top group was Congressman Fleming, one point behind the two, thus, in a statistical tie as a leader for the US Senate race.

The Fleming campaign, on the same date, posted on its own campaign site, “Boustany and Campbell hold steady at 15%, Fleming doubles support to 14%, and Kennedy plummets to 11%".

At the top of the Fleming web page which article is under the “News” section of the site, is the graphic at the top of this article.

Other than the above reference in a green box at the upper right of this image on its website, at no other location in the text of the article, did the Fleming campaign reveal that it paid for the JMC poll.

Nor does that green box image state for what the Fleming paid.  The picture?  It did not state the poll was paid for the Fleming campaign.  Nor does the article reveal who wrote it.

Interesting, the confusion as to who paid for the poll has caused a little confusion in the political industry bringing "alleged" enemies together, to discuss.

A short twitter conversation started between David Duke, a candidate and Tyler Bridges, the Advocate writer, who has written two books about Duke about the very issue.  That tweeting occurred today, which follows: 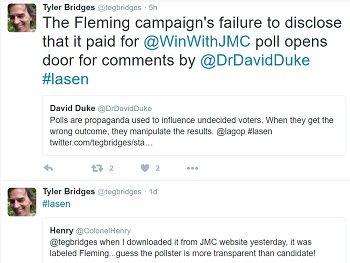 The big news item from the poll, other than the fact that Fleming paid for it, is the story line that John Kennedy, who has been the leader in all of the polls to date, including the last Pinsonat poll, is no longer at the top of the candidate heap.

SMOR had revealed Kennedy at a dramatic 17% drop since its last poll in May 2016.  However, in a recent interview, Pinsonat also noted that Kennedy had not yet begun his TV advertising, which he stated on the day the SMOR poll was released.

The JMC Consulting poll supports the SMOR poll regarding the Kennedy slippage, but, claims that Campbell is tied with Boustany.  Pinsonat’s poll showed a two points differential with Kennedy at 17 and Boustany at 15, in his most recent SMOR poll.

Another major comparison is the reversal of Campbell and his Democrat counterpart, Caroline Fayard.  In the Pinsonat poll, Fayard led Campbell.

JMC Analytics and Polling was recently commissioned to do a poll in Louisiana both for the Presidential and the (24 candidate) U.S. Senate race. Among its findings:

Here are the results from the Fleming poll:

Tomorrow at 9AM, Bayoubuzz will engage in a FB Live interview with John Couvillon of JMC Analytics.  Come join us and watch.