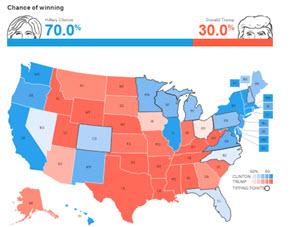 The debate over online polls versus scientific polls might rage on in the minds of Donald Trump and some of his supporters, but, according to some recent post-debate numbers, Hillary Clinton has emerged the victor of Monday night’s debate.

The CNN and NBC Survey Monkey polls have Clinton has the clear and decisive winner of the debate.

According to other polls, the debate appears to have resulted in a slight bump in Clinton’s favor, especially in five critical battleground states.  Clinton tops Trump in Colorado, Florida, North Carolina, Pennsylvania and Virginia in the left-leaning Public Policy Polling (PPP) surveys out Thursday.

In Colorado, PPP puts her ahead by seven points in Colorado, 3 points in Florida, 4 in North Carolina, 5 in Pennsylvania and six in Virginia.

However, another poll from the La Times, which has consistently been a poll outlier, shows Trump ahead by 4.  That poll was conducted starting four days prior to the debate when Trump was closing the gap.  The PPP poll was taken post-debate.

The NBC Survey Monkey poll, which was released yesterday shows that Clinton did well with women and Independents.  It also indicated that Trump, who claims that his demeanor is his greatest asset is not playing well with voters during the debate.

In the Nate Silver’s 538 real-time interactive forecast, Clinton now leads 70 to 30, which is a significant climb from pre-debate forecast “if the election were held today”.   That number has climbed by roughly twenty points since Monday, pre-debate.  She also has 62 percent in the future forecast if considering the polls and 60 percent if including the economy and polls.