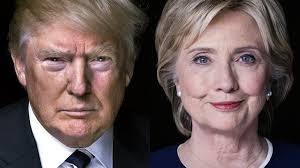 In a head-to-head match-up, Clinton’s lead grows  to to 13%, the largest advantage over Trump since the poll began testing the pair last September.
A total of 52% of respondents say that the audio tape should be an issue in the campaign, while 42% say it should not be an issue.
Perhaps of more concern to Republican leaders is the fact that 49% say they would like to see Democrats in power on Capitol Hill, compared to 42% who chose the GOP.  It’s the largest advantage for Democrats since the October 2009 government shutdown.
Similarly, Rasmussen Reports latest national telephone and online survey of likely U.S. voters finds that Clinton has jumped out to a seven-point lead, 45-38%.  Its last poll had Clinton at 43% and Trump at 42%.
Libertarian Gary Johnson had 7% and Green Party Jill Stein 2% in the latest poll.
Rasmussen  says  that  Clinton’s  lead  in  this latest poll is the largest margin stretching back to August of last year.
What is significant is that 80% of voters say they are already certain how they will vote in this election.  Among these voters, Clinton leads 51% to 46%.
Among voters who could still change their minds, it’s Clinton 43%, Trump 25%, Johnson 25%, and Stein 7%.

More in this category: « While some GOP jump Trump train, Louisiana Republican leaders on board, but Louisiana Budget Task force need to rethink its governmental growth policies »
back to top