All the Fake News that is fit not to censor 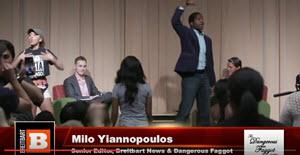 Social media is finding itself in the crosshairs of dueling ideologies. Critics of the platform decry low publishing standards and are hopping mad at the so-called “fake news” phenomenon. It’s best described as the planting of deliberate falsehoods disguised as real reportage. Editors at the Onion must be quaking.

When the mainstream media picks up imaginary stories and republishes them as “true” that make them even more noxious. The ire comes, ironically, from both the left and right, though the fake news this election had a tendency to favor the right more than the left by a wide margin.

“Pope Endorses Donald Trump for President” is a prominent example of a fake story that had long legs –and many true believers. While more Catholics voted for Donald Trump than Hillary Clinton it’s arguable that the concocted story was a reason, but who knows.

No matter who publishes a stretched, or false, “truth” about the country’s leaders, actual or prospective, these expressions are a revered part of a grand old American tradition. The founders expected us to mix it up and protected this activity. Benjamin Franklin, often, published political tracts, some less than straightforward than others, under an assumed name. It’s a historic oxymoron but the more we disagree the freer we are. Being disingenuous is a cherished American tradition!

In 1828, then presidential candidate Andrew Jackson was accused of adultery in a pamphlet sponsored by a Washington paper. The news was fake but juicy for the day, meaning it was eagerly consumed. That accusation, however, was mild compared to the scurrilous canard that Jackson’s mother was a whore brought to America by the British, presumably, to service our first enemies, the Red Coats.

The list goes on and on. Past candidates for President have been called liars, lunatics, syphilitics, drunks, murderers, and worse. More than one has been called the devil. It’s a revered tradition that makes the antics of the cycle just passed seem downright charitable. One candidate for president, even, accused his opponent of being a cannibal. He did not win but, probably, affected attendance at state dinners

The freedom to say what one wants exists, in part, because others are just as free to correct, or dispute, whatever they perceive to be wrong, improperly motivated, or out and out lying. The fake objection to fake news” is that people might believe it and be influenced, especially during elections. That’s a risk we the people, always, have been willing to take. If truth is the ontological test for publication then every product of the imagination, be it writing, sculpture, drawing, painting, filming, recording, or anything else, is at risk. Even thinking can become suspect.

Breitbart News and its former top honcho, Steve Bannon, the guy measuring drapes next to the oval office, have been accused of publishing hateful and mendacious materials. That’s fine and dandy, but it’s sufficient to say, “If you don’t like it –don’t read it.” That’s always been the American Way. Whatever Breitbart may have said, worthless or invaluable, is protected speech no matter how truthful, self-serving, distasteful, or slanted others may perceive it to be.

For purposes of the law Breitbart enjoys the same protections as The Washington Post, CBS, Telemundo, or The Daily Worker. Basically, only hateful, seditious, or defamatory speech is forbidden. Even then, it’s always a close call.

In the final analysis, it’s still the consumer’s brain and his, or her, a choice about how to fill it. This is not to say that there aren’t judicial remedies and legal penalties for extremes, such as sedition, inter alia, but as a general rule it’s open sesame when it comes to expression. Both sides of an almost perfectly divided nation might ponder this as we face a new administration some think is anxious to mute its critics.

The greatest proponent of free speech in American history was, undoubtedly, Justice William O. Douglas. In the judge’s book, A Living Bill of Rights, Douglas described his views in a nutshell: “The argument against censorship is clear: no person should dictate our tastes, ideas, or beliefs. No official has the right to say what is trash or what has value.”

The inherent danger in attempting to stop fake news is that it would require fact-checker to determine what’s real and what isn’t. That’s known as censorship and prior restraint. We can live without that.

More in this category: « Death of Obamacare, but how do we kill it? Interview with expert, Sally C. Pipes Trump's triumph, Obama's long stroke »
back to top