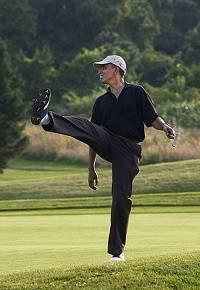 Don’t expect President Obama to go away as quietly as an Irish mother’s whisper. It’s not going to happen. For starters, he was leader of the Democratic Party for the last eight years. This is good news for a scandal-plagued DNC that’s, essentially, rudderless right now. But, who needs an administrator when you have a shadow President to direct the party’s activities from behind the statuary. There are rumors that his Presidential Library is going to be built on K Street.

Besides commenting on President-elect Trump’s activities, as he sees fit, Obama will remain a potent force on the world stage. He’s building a private email server in the basement of his Washington, D.C. home to facilitate secret communications right now. Expect that the perks of a former president will be explored in unique ways during Trump’s first term. He’d be wise to keep Obama closer than Ivanka but that’s unlikely to happen because Trump’s act, so far, is a stand-alone.

Obama is a basketball playing robust 55. He’s witty and charming and will be the honored guest wherever he travels -for whatever purpose. A banquet seat next to the ex-president will be an “A ticket” anywhere in the world. So would a private meeting, a phone call, telex, fax, telegraph, or tin-can-to-tin-can communication. Watch how many foreign leaders line up to enroll in Obama University.

The Ex-Prez has a well-developed apparatus of back channels many of which Trump and his team will take four years, or more, to discover. Ronald Reagan, Polish labor leader Lech Walesa, Margaret Thatcher, and John Paul II brought down the U.S.S.R. and did it on the sly without so much as a blow dryer. This triumph turned out to be Reagan’s greatest legacy, which makes the new administration’s current overtures to Russia even more puzzling.

At 70, Donald Trump is a tad zaftig, especially when compared to a fairly athletic man a decade-and-a-half younger. Trump was a standout athlete in his youth but no longer plays baseball and, probably, golfs out of a cart. More significantly, the new President has no appreciable set of back channels, yet. His world contacts derive, he admits, from the business empires he built overseas and the foreign beauties who’ve competed on his stages.  Foreign business experience counts but it’s not exactly comprehensive. To Donald Trump, Haiti just might be what you feel about your enemies.

Trump is fit in ways, however, that more than make up for his age. While Hillary Clinton napped on the campaign trail Donald displayed an inner energy that can’t be measured by bicep circumference. If he was a kid he could’ve lifted the family station, all by himself, off his father’s foot when the jack fell. Despite all his energy, as he ages in office Trump, probably, will find himself delegating much more territory to his subordinates than Obama ever did. The top job is enough to turn a man’s hair white.

The concept of shadow leadership is hardly new. History abounds with its exercise, as does “Game of Thrones.” The potential for mischief can be found in religion, too. The conservative Pope Benedict XVI lives in a whole building all his own. It’s a mere stone’s throw away from the liberal Pope Francis’ three-room lair, to cite one contemporary example. Benedict, however, at least to date, has kept his mouth shut making him a small threat to Francis, whereas Obama might not accord his successor the same courtesy.

In his rented digs in D.C. Obama will be almost as close to the White House as Trump’s Old Post Office Hotel. That, alone, is an unprecedented event because most modern presidents skip town the minute their tour of duty is up with little more than a Vaya con Dios. The Obamas say they’re staying only until their youngest daughter, Sasha, finishes high school in a year but who really knows. Embassy row parties are top flight and the company heady. Notwithstanding the allure of the capitol, physical location in the age of electronic communications and Trump Air is less meaningful than it used to be.

If Obama is concerned about his mark in history he’s in a unique position to influence whatever judgments it will make. While the Ex-Exex has been temperate, even conciliatory, towards the Trump regime there’s no guarantee the wheels of Democracy won’t include a conductor in the caboose.

Donald Trump knows what Obama can do, at White House Correspondents’ Dinners and on the campaign trail. The soon-to-be former boss of all bosses is, also, still very popular. Jared Kushner, the new leader’s son-in-law, should get the chair in the West Wing that he covets and be assigned to the Obama detail. The arrangement might be good for both men.