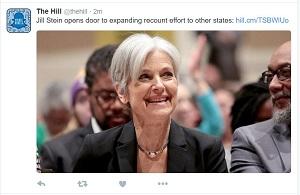 Who would have thought the craziest election in American history would evolve into the nuttiest transition?

Not me.  Quite frankly, I thought we would enjoy some sanity, if only for a day or perhaps, two.  But, this weekend shows how fleeting a serious moment can be in the "world of Donald Trump".

It started with Jill Stein, the Green Party, who was colorless and nameless during the election.  Last week, she announced her challenge to election results in three states she would not have won had she been spotted with tens of thousands of votes' leads.

Ah, but then, Hillary Clinton campaign entered the fold.  Of course, she knows she has zero chance in a recount, no more than Al Gore, for sure.  In fact, Gore’s opponent didn’t have the help of the Russians and  he still lost.  Trump did, so, Hillary has no shot, as if she ever did.

So, who might be the winners and losers from this latest 2016 election shout out?

Well, the loser recognition goes to Hillary Clinton. She did not deliver on election finality, having previously conceded.  Her let's support The Donald was short lived.  Technically, her counsel claims they are only monitoring the results and even Trump can join in. Sure. Based upon all information currently available, there is no way she will be President, come 2017, so what does she gain? Nothing.

Call it vindictiveness or call it politics, but Donald Trump, who some actually call “gracious” for protecting Clinton from prosecution, now has further thoughts.  How about an investigation into Clinton Foundation?

Donald Trump ends the weekend by going on a twitter rampage, makes statements that are not factual (as usual) but his supporters will make him the winner in this latest bout.   As usual, Donald wins and everyone contesting him on anything end up the losers--especially, the media.