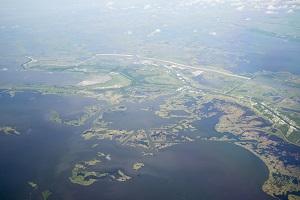 Louisiana lawmakers, whether State or Federal, might need to decide if they want a border wall at the Mexican border or a wall of some type (figuratively speaking, that is) along the Gulf of Mexico.  The same goes for all states that border the Gulf and the Atlantic/Pacific Oceans.

Due to global warming, whether man-made or not, the Oceans and the Gulf are creeping into the mainland.  However, very few locations in the United States are as bad as what Louisiana is currently facing, particularly after the Hurricanes Katrina and Rita and other storms that have only exacerbated the problems and sharpened the awareness that Louisiana communities along the Gulf cannot survive with the federal government doing little, or nothing.

Over the past twelve years, in particular, the State has focused on the Louisiana coast and erosion more than other states, it seems, however, each year, the state, according to the state's statistics, is losing between 12 and 19 billion dollars as Gulf Waters invade the state’s wetlands and infrastructure.

What is the state doing to protect itself from such intrusions?

On Monday, I sat down with Mike Stagg and discussed the issue.

Stagg, a community activist, an environmentalist, contributes to The Independent in Lafayette.  His website and podcasts are located at Where the Alligators Roam.  Stagg took me through the latest developments and underscored, quite frankly, that even if you don’t accept man-made global warming, the State of Louisiana, still is bleeding over ten billion dollars per year, has a fifty billion dollar plan as approved by the Coastal Protection and Restoration Authority, but, simply does not have the resources to fully fund the plan.

According to Stagg, Louisiana does has BP money and a revenue flow spearheaded by former Senator Mary Landrieu and then-Congressman Bobby Jindal (and thanks to many others), but, that amounts to only roughly forty percent of the revenues needed, at a minimum.

Below is a short transcription of a part our conversation and an excerpt of the entire Facebook Live interview.

“He worked through a list he you know the state's getting a good chunk of money out of BP settlement probably because we have a plan the master plan is in effect paying for itself already but because we are going to be able to move first before the other Gulf states figuring out how we can put some of this money together, it gives us a competitive advantage how we can put this money to work, it gives a competitive advantage.

So Bradbury works through this list and ultimately what you end up with is that we're going to get maybe eight or nine billion dollars from the BP settlement and then you have some continuous streams that money Breaux Act money of the money that Mary Landrieu and Bobby Jindal got increased royalties for offshore development GOMESAI think it's called--  that that are going to kick in that are kicking in are going to be in place for a long time well those are the only funds you can count on and the combination of the BP money and this these other federal revenue streams adds up to about 19 billion dollars so as Bradbury told the committee we're about 30 billion short.  Now they when they started this year's the planning for this cycle which really starts immediately after plans adopted--  they start looking at things they have an annual plan-- when they-- started this year-- that the evaluation for this plan, they had over 200 projects on the books, 124 made it into their first draft of the final plan and what they did the other day,  the day after this committee meeting I think it was last Thursday they added four more projects-- they didn't add more money

They added four more projects. Some of them in this area.  Some, there's a Vermilion Bay project involving Iberia and Vermilion parish as there's coast line  and Cameron parish,  some swamp or some wetlands redevelopment in Terrebonne Parish but but  here's  the thing we don't have the money to do this and this is where we're stuck