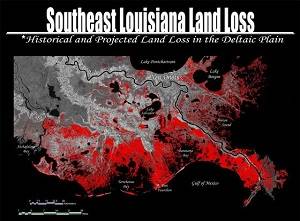 The efforts to rebuild the Louisiana coast has suffered a major and immediate setback, assuming that Congress goes along with the most recent budget proposal from President Trump.

On Tuesday, the Trump administration released its budget plan and among many of the cuts and decisions to reign in costs and flow of money from the federal treasury is the proposal to stop payments to Gulf of Mexico States as part of the oil revenue share approved in Congress post-Hurricane Katrina.

Louisiana is depending upon those payments as part of the money needed to rebuild a coast seriously impacted by erosion.  The assault upon the coast substantially hurts the state's economic vitality and damages Louisiana's ability to contribute to the nation’s economy.

The loss of revenue could average of $140 million dollars for 25 years if Congress repeals the post-Katrina law.  The cut would have an immediate impact as the State has factored in those revenues for its Master Plan to restore the coast, as early as the 2018 budget. Louisiana will need at least $50 billion dollars to fulfill that Master Plan although some believe the total cost could be twice that amount.

Bayoubuzz is providing a forum to discuss these recent budgetary developments and the economic impact of the Louisiana coast as we host a Facebook Live event with Jimmy Fredrick, Director of Communications of Coalition to Restore Coastal Louisiana.

Also, you can call in by telephone and ask questions or comment.