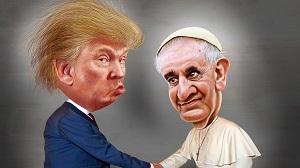 Donald Trump’s golden tour just went to Rome. It was, hardly, a rousing success. The first time a dour Pope Francis smiled at a member of Trump’s entourage was when the President’s wife, Melania, apparated, dressed in old school Papal audience attire. While Trump met with Francis, in private, his main political accompanists, Son-in-Law and Senior Advisor, Jared Kushner, Daughter Ivanka, and Secretary of State, Rex Tillerson, milled about in a small corridor where they were, politely, chatted up by miscellaneous Papal courtiers of no particular distinction.

To greet Trump’s arrival at the Vatican there were no witty Cardinals, a less than full complement of Swiss Guards, and no gaggle of high ranking prelates eager to experience greatness. To get to the Pope, Trump was forced into a crowded, tiny, elevator and then obligated to march, in quarter step, behind a long trail of shuffling chamberlains before, finally, reaching the Pontiff. It was less than a regal welcome by Francis, a man who couldn’t be more different than Trump.

There was, in due course, the traditional exchange of gifts. Pope Francis gave Trump selected copies of his writings, including his teaching on the environment, “Laudato Si,” and a bronze medallion dedicated to peace. The President gave the Pope a set of Martin Luther King, Jr.’s first editions, one signed, each specially bound and gold-leafed, in a custom built case. Francis, who is known to admire King, also, received a large lotus flower sculpture that would do any Miami yard proud. It’s O.K, though, because it’s, damnably, hard to buy art for a man who owns the world’s biggest collection.

While the White House contingent was trying hard not to look uncomfortable, as they milled about amongst themselves, Melania was given a private tour of select private Apostolic Palace salons as Trump and Francis talked. After the two leaders ended their meeting there were a series of awkward group photos and the President got to see St. Peter’s which had been closed to the public for the occasion. No one reported if the two-year Jesuit educated Trump lit a candle, or not.

Throughout his Vatican visit Trump beamed like a lottery winner. He, even, promised Francis that he wouldn’t forget what the Pope said and that he’d read the Holy Father’s gifted works. Sure. “Laudato Si,” alone, contains not less than 172 footnotes and is considerably denser than Mad Magazine, but one can hope that Trump meant what he said, and said what he meant. The Pope’s words could influence the President’s thinking, for the better, on a number of important topics, including compassion.

While Trump fiddled about in Rome, the fires kept burning at home. A new Fox News poll reported disastrous results for the President. 60% of the American people believe he fired the FBI Director, Jim Comey, to quash the blooming Russia investigations. Other bad news included the finding that more than half of all American’s believe the President is abusing the powers of his office, roughly the same number who disapprove of his overall job performance. Trump’s approvals remain at a dismal 37%.

Russia never left the news while the President was globetrotting. Vladimir Putin may have, yet, another reason to regret his involvement in the 2016 election because Russia’s banking sector, and its myriad tentacles, is coming into sharper focus as a target of the investigations. Moles can be sent to Siberia; banks can’t, and dollars don’t lie.

Before this business ends, the GPO may wind up printing as many grants of executive clemency as the U.S. Mint does dollars. When most of the President’s men, who’ve had Russian contacts, lied about, or concealed, them, it’s not unfair to ask how the public can be expected to trust a man who has denied everything and tried his best to suborn all inquiries into untoward influences. There’s  on saying that the monkey is never far from the organ grinder.