Time for Trump's cabinet to intervene, threaten to quit 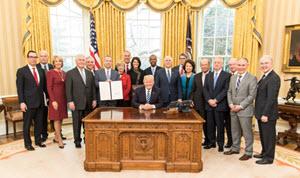 How do you deal with the most powerful man in the world who tweets statements that might be hurtful to the country and to his own legal interests and whose poll numbers are the lowest for any new president in history?

One columnist, Quin Hillyer, has a solution. Intervention.

Hillyer, a conservative writer said today during a Facebook Live interview, “The five most senior advisor or cabinet-level advisors to Donald Trump meaning the secretaries of state defense and Homeland Security along with the National Security Advisor and the Attorney General should go to Donald Trump privately and read the riot act, to do what I call them intervention, and tell him that if he doesn't start getting more disciplined than if he doesn't stop uh basically you know going rogue,  that they will resign in mass and denounce him”

Hillyer is a columnist for various conservative publications including Washington Examiner and is contributing editor to the National Review.

He made his comments known earlier this week in a column appearing in the Examiner.

Here is the link to the FB live interview.