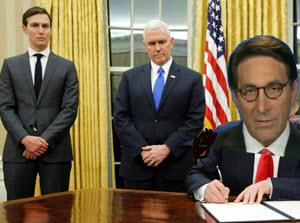 Anyone, seemingly, who ever got a Christmas card from Donald Trump is lawyering up. This is good. Everyone needs a lawyer, even when they don’t, and it’s nice to see leadership give good example to the public.

Trump, so far, has hired crony lawyers to make conflicting noises on T.V., albeit, to poor effect. Everybody else is taking the threat from investigations into Russia seriously; though Trump is canny enough to be play-acting for all anyone knows. Jeff Sessions has hired Charles "Chuck" Cooper, an experienced lawyer friend who is regarded among conservatives and acknowledged by others. Mike Pence hired pricey McGuire Woods' Richard Cullen, former U.S. attorney for the Eastern District of Virginia under President George H.W. Bush. So far so good.

Jared Kushner, however, is between a hard rock and an immovable object. His representation, reportedly under review, is by Jamie Gorlick, a partner at WilmerHale. According to Business Insider, Gorlick, “also represents the interests of Ivanka Trump and former Trump campaign manager Paul Manafort.” That’s a fine kettle of fish since Robert Mueller, until the day of his appointment as Special Counsel, also, was a WilmerHale partner. Mueller, since, has hired out of his old firm and raided the Department of Justice for key personnel.

The ABA Model Rules of Professional Responsibility dealing with lawyer disqualification can be complex, except as they relate to waiver. That is the “freebie” card. The operative waiver, here, can be inferred from the fact that Trump could have fired Mueller, at any time, but didn’t. To do so, now, would be a regretful decision, one approximating the wearing of a full-length mink stroller to a PETA fundraiser.

Maybe, someone told Trump, correctly, that it’s good to wait these things out. The lawyers are just getting started and the Special Counsel has yet to send his budget up to Justice’s Rod Rosenstein who must approve it. All things Russian influenced will come out but, maybe, not every monetized player, broker, organization, or interested party, if, and as applicable, will see daylight. There’s, also, within culpability, if any, many shades and nuances from the faintest gray to fire engine red. It’s going to be a game of French, not Russian, roulette.

James Comey felt something wasn’t right about Trump. Other intelligence chiefs may have corroborated some of the reasons for Comey’s sensitivity in testimony before classified congressional hearings; and, possibly, to Robert Mueller, durectly. The missing link that’s still being sought is any movement of Trump, in pari delicto, with Russian actors. It doesn’t look red hot for the President, but he’s been clueless before and may have been, likewise, when the Russian’s showed their power over the American ballot box. No matter if feelings get hurt, almost all Americans want to know who’s at fault.

Mueller’s team will grow and, already, contains renowned prosecutors with expertise in financial and organized crimes, including money laundering.  It’s going to a very long, hot, summer but, eventually, the theatrics will subside and it’ll be the lawyers who control the future of this presidency and, perhaps, redefine some of the powers of the office. Trump, even if he thrives, may turn out to be the last titan to serve as U.S. President. It’d be sad, but fitting, because he’s a man author Theodore Dreiser would understand.