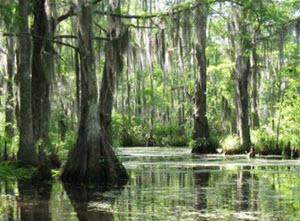 I picked up a Charlotte newspaper when my plane landed, and the sports page ballyhooed the arrival of the new Tar Heel quarterback Brandon Harris. Tiger fans will recall that he was the LSU starting quarterback just two years ago.  My rental car rep was from Laplace and had migrated north after Katrina.

I headed northwest toward our family’s second home in Linville.  You can’t go into a restaurant in this part of the country without seeing a menu selection that includes Louisiana delicacies.  Blackened mountain trout, jambalaya, a variety of gumbos, red beans and rice, and po-boys.  I even found a muffaletta on a menu up in Boone, N.C.  The seafood’s not fresh like we are used to, but these mountain folks seem to know where really good cookin’ comes from.

Fly-fishing has become popular along Louisiana’s inland waterways and the coast, but there is something special about wading into a cold mountain stream in search of a rainbow or brown trout.  The state regularly stocks these mountain streams so there is always plenty of fish to catch.  I usually stop at Faye’s General Store in Linville to catch up on the local gossip and pick up a locally tied Stonefly or G-Nell fly.  Then it’s off to a local stream with my Orvis two-piece, two weight, 6-foot long graphite rod that I borrowed years ago from an old New Orleans friend, David Voelker.

I can remember some years back when I went to the mountains over Mardi Gras.  I was at Faye’s drinking coffee around 7:30 in the morning; it was an hour earlier than in Louisiana. The phone rang. One of the locals picked it up and told me that Gov. Mike Foster was calling me. Now, remember, it’s 6:30 AM in Louisiana, and it’s Mardi Gras. I thought it was my wife, Gladys, playing a joke on me.

My coffee drinking companions at Faye’s had a hard time believing that the Louisiana Governor would call me up in the North Carolina mountains at the crack of dawn on a state holiday to discuss insurance business.

While still in the State Senate, Gov. Foster had created the Louisiana Worker’s Compensation Corporation to help small businesses that were having trouble finding insurance coverage for their employees. Even as Governor, he was concerned about a healthy insurance climate. I found him to be extremely helpful on a variety of issues I dealt with in public office during his eight years at the helm of the state.

The highland fishing was productive, but it was all catch and release.  Nothing close to bringing home an ice chest full of red fish and speckled trout like we do back in the Bayou State.

The one advantage to being in the mountains in July?  How about 67-degree weather, sleeping with your windows open, and no humidity?  Yes, there are trade offs, but weighing the pluses and minuses, I’ll still take the Bayou State year around.  Remember, we are only weeks away from football season.  I’ll pass on the Tar Heels and gear up for “Geaux Tigers!”