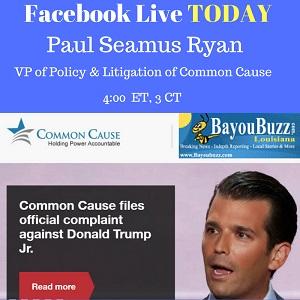 Aside from all of the 24/7 media buzz over an ever-changing narrative by Donald Trump Jr. and the White House, are there any legal consequences from the recent disclosure of the June 9, 2016 meeting with a Russian attorney at Trump Towers?

President Trump and many of his loyal followers call it “fake news”, a “scam” more evidence of a “witch hunt”. Others claim there is more “there there” and if anything the email chain shows that the Trump campaign was willing to receive information from the Russians and that perhaps the claims of collusion with the Russians were more visually presented.

One of the consequences of the revelations was a lawsuit filed by the nonprofit organization Common Cause . The organization filed a formal complaint against Donald Trump Jr. & Trump campaign alleging for breaking election law.

Some experts, such as Harvard Law Professor Alan Dershowitz have stated that the Trump’s did not commit a crime.

Today, Stephen Sabludowsky, Attorney and Publisher of Bayoubuzz will interview Paul Seamus Ryan, the VP of Policy and Litigation for Common Cause to discuss its complaint and related issues.

If you are interested in watching it live visit Bayoubuzz.com at 4PM ET, 3PM.  Or, you can watch it live (and ask questions or comment) on the Common Cause Facebook Page, the Facebook Pages of Stephen Sabludowsky and Bayoubuzz.com.

A toll free phone number will be posted on the video to receive comments and questions.