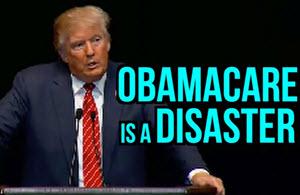 For eight long years, Republican candidates have promised to “repeal and replace” Obamacare. It is biggest reason why the GOP took control of the U.S. House in 2010 and the U.S. Senate in 2014. Ending the nightmare of Obamacare was also one of the major motivating factors for the 62.9 million Americans who voted for Donald Trump.

Now, after the failure of the Senate to act and deliver Obamacare to the ash heap of history, it is clear that Republicans never meant any of those promises. It was just meaningless campaign rhetoric designed to garner votes.

The real losers are the conservative activists who organized Tea Party events and helped give Republicans control of both the House and Senate. Trump voters have also been abandoned, not by the President, but by the congressional leaders who never really supported the Trump agenda.

As an outsider and populist, Donald Trump is directly at odds with the leadership of Congress. House Speaker Paul Ryan and Senate Majority Mitch McConnell are only lukewarm supporters of the President. Often, they have been critical of everything from his tweets to his political plans.

The dilemma for Donald Trump is that his agenda cannot be fulfilled by executive actions only. Unfortunately, he needs the support of the weak-kneed Republican congress that has not been able to deliver on the major parts of his agenda.

Other than the confirmation of Supreme Court Justice Neil Gorsuch, the Republican House and Senate have delivered nothing of substance for President Trump and the American people. These privileged politicians are paid handsome salaries, enjoy outrageous perks and large staffs, and yet do not listen to their constituents. They are captives of the lobbyists, special interests and the media. They are creatures of the Beltway, denizens of the noxious swamp.

Unlike Democrats, who easily unite for the benefit of their party, congressional Republicans are like a herd of cats, unmanageable and ineffective. McConnell should be replaced by real conservative and Trump supporter. On his most important task, McConnell failed miserably, delivering a major setback to the President and the Republican Party.

McConnell’s lack of leadership was apparent after the second edition of his Obamacare reform bill crashed and burned. Thereafter, his idea of a repeal only option followed by replacement two years later also appears to be dead on arrival.

In the process, the President’s entire agenda is in jeopardy. If Obamacare is not repealed, it will be much harder for the President to garner congressional support to implement his other major campaign promises: major tax cuts, building of a border wall, and massive new infrastructure spending.

Ideally, Republicans should completely repeal the disastrous and unconstitutional Obamacare legislation. This would give return America to the healthcare status of 2010, prior to Obamacare mandates and exchanges.

Thereafter, free market reforms should be enacted giving Americans the opportunity to purchase health insurance across state lines, build Health Savings Accounts. All of the mandates and Obamacare taxes need to be eliminated. States should be given block grants to deal with indigent care and high risk pools.

Instead of passing legislation to offer Americans common sense healthcare solutions, the nightmare of Obamacare will continue. Premiums will continue to rise, insurance choices will become more limited and the march toward a single payer system will be inevitable.

Without the guts to make tough decisions or the desire to unify, Republicans will gift wrap the 2018 mid-term elections for the Democrats. This will give the left wing, crazy, and unhinged Nancy Pelosi the position of House Speaker once again.

If that occurs, it will be a total nightmare for our country, but it will not upset many of these weak Republicans in Congress. For these members do not have the courage of their convictions and are unwilling to challenge the establishment, the Democrats, the special interests and the media. These Republicans do not want to lead and prefer to be controlled by Democrats and answerable not to their constituents, but to the cocktail circuit in Georgetown.

The irony of this situation is that the Republicans have a congressional majority, but are unwilling to enact an agenda and prefer to be controlled by the minority, the Democrats, and the liberal media.

This strategy will only lead to more difficulty and obstacles for President Trump who has a winning agenda if only it could get implemented.