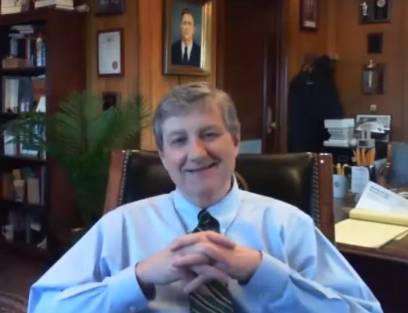 Seven candidates qualified to run for the job of State Treasurer, the only statewide race on the ballot on October 14.
It is a mixed bag of candidates. There are six males and one female; five whites and two blacks; four Republicans, one Democrat, one Independent, and one Libertarian.  The candidates are:
*Ron Ceaser. a black Independent from Opelousas.
*Angele Davis, a while Republican female from Baton Rouge.


*Derrick Edwards, a black Democrat from Harvey.
*Terry Hughes, a white Republican from Lafayette.
*Joseph D. Little, a white Libertarian from Ponchatoula.
*Neil Riser, a white Republican from Columbia.
*John Schroder, a white Republican from Covington.
The three most talked about candidates leading up to qualifying – Davis, Riser, and Schroder – qualified.  Speculation about a black getting into the race came to pass – not one, but two blacks will be on the ballot.
The race will likely come down to a battle between Davis, Riser, and Schroder. They are the big names in the race and will be able to raise the most money.
Davis is president and CEO of the Davis Kelley Group, Riser is a funeral home owner and a state senator, and Schroder, who resigned as state representative to make the race, is a small  businessman and real estate developer.
In reality, this is a special election to replace longtime State Treasurer John Kennedy, who was elected to the United States Senate.  The winner will fill out the remainder of the term, which runs through 2019.

Bad news for treasurer candidates
JMC Analytics decided to poll the race for State Treasurer before qualifying, and the news was not good for the candidates.
The pollster used four candidates in its survey – Derrick Edwards, Neil Riser, John Schroder, and Angele Davis.
The race is considered lackluster as the only statewide position on the ballot on October 14, so it will be hard to generate much interest.
The poll confirms that.  Between 55% and 59% of respondents have never heard of any of the four candidates polled.  Fifty-seven percent never heard of Davis, 59% of Edwards, 55% of Riser, and 57% of Schroder.
When asked whom they would vote for among the four, the results were:
Derrick Edwards (D) – 18%.
Neil Riser (R) – 8%.
John Schroder (R) – 7%.
Angele Davis (R) – 7%.
A whopping 60% were undecided.
These four candidates promise to be the main combatants in the race.  And the poll show they have their work cut out for them.
Tweet
Tweet
Published in News

More in this category: « Republican Congress fails Trump on healthcare, undermine his agenda From the first TV debate to "no debate", the future of politics is online video »
back to top