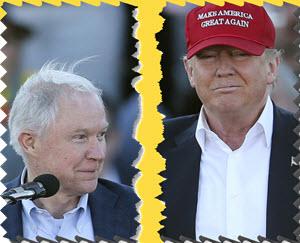 The White House is full of Trump’s enemies, as is the intelligence community and State Department, evidenced by a torrent of  negative leaks. Trump says his anger at Sessions stems from failure to hound Hillary Clinton to the clink and lack of resolve in ferreting out the insidious leakers. It’s harder to do the latter than he may think.

If Edward Snowden and Chelsea Manning, once relatively insignificant cogs in huge intelligence enterprises, can reveal America’s deepest secrets before detection the same is true of actual, or prospective, ensconced leakers whose names no one knows at the moment. You can’t fire everyone in the intelligence community, or State, and lifers in these agencies will continue to wound the President for his persistent denigrations of their life’s work. Trump didn’t need to make these enemies. It was a huge mistake.

Few positive conclusions can be drawn from Trump’s persistent efforts to squelch any investigations that could determine his campaign colluded with Russia. Can this obsession be because Russia still has leverage over this President who appears more concerned with keeping his tax returns and financial data secret than protecting our electoral processes and national security?

Natalia Veselnitskaya, attorney for Russian intelligence, the Kremlin, and an anti-sanctions advocate, will be called to testify before the Senate Intelligence Committee after she announced an offer to appear, but only if her safety in the U.S. can be guaranteed. It’s unclear whom she fears, but it isn’t Russia.

The propaganda value of having someone the New York Times called a “Fearsome Moscow Insider” appear before the U.S. Congress is immense and shows how deeply the Kremlin has infiltrated U.S. systems. The possibility of an appearance, also, carries a warning to President Trump. If Veselnitskaya tells a different story about the pre-election meeting she took with Don Trump Jr., Paul Manafort, and Jared Kushner, among others, Trump’s presidency is at greater risk than ever before.

Russia helped Trump win through propagation of free advertising on the internet, disguised as  “real news.” It may benefit, now, more from a Trump-free White House than if there’s no change at the top. New sanctions are coming. The Kremlin’s luxurious seized estates are not being returned, and Russia is more scorned by the American  public than anytime since the Cold War and Cuban Missile Crisis. Sessions, in due course, may be happy to have gotten out.