My Twitter Nightmare on Trump Street: No Smooching with Priebus, Bloody Streets 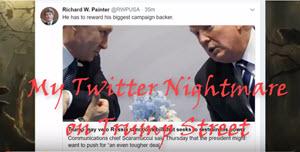 I’m looking at Twitter this afternoon and my thoughts are literaly shaking.  Did I really wake up from last night’s nightmare?

No. I’m not talking about my dream.

It's what's happening, right in front of our eyes.  It's on my Twitter Streem!! Look!

Republican Senators warning President Donald Trump not to fire Jeff Sessions or do something remarkable like a recess appointment to replace him.  This from one of Trump’s loudest critics, “Lindsey Graham: "Any effort to go after Mueller could be the beginning of the end of the Trump presidency."Donald Trump might veto the legislation curbing his power over Russian sanctions, with his new Communications Director claiming, the President might want stronger sanctions against Putin…

Roger Stone threatening that “blood might run in the streets if a coup is attempted” against Trump.  A Democratic House member claiming that Trump lied regarding the Transgender military ban, citing a story about the Joint Chiefs claiming they did not know ban was coming.

The Boy Scouts of America are apologizing for Potus’s conduct—so says another Democratic House member.  Anthony Scramucci threatening Reince Pribus to prove the former Chairman of the GOP and now Chief of Staff is not a leaker.

My Lord. If I’m awake, please, please, take me back to sleep.  "Twitter on Trump Street", is, sorry, I can't handle it.

Watch my video and Welcome to my real Nightmare.
--

More in this category: « Digital Summer vacations of '17 nothing like the summers of '42 or even '92 Pollster: Governor Edwards at inflection point in administration, Fiscal Cliff coming »
back to top