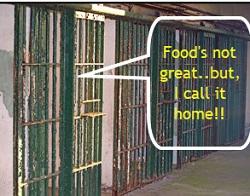 The state had a lower percentage of inmates serving sentences for violet crimes and a much  higher percentage serving sentences for drug offenses than the nation as a whole.
Here  are  the top 10 states for incarceration and   the number of prisoners per 100,000 population.
Louisiana – 816 per every 100,000.
Oklahoma – 700 per 100,000.
Alabama – 634 per 100,000.
Arkansas – 599 per 100,000.
Mississippi – 597 per 100,000.
Arizona – 592 per 100,000.
Texas – 582 per 100,000.
Missouri – 526 per 100,000.
Georgia – 517 per 100,000.
Florida – 512 per 100,000.
But there is hope on the horizon.  Democratic Gov. John Bel Edwards recently signed 10 bills into law that overhauls the state’s criminal justice system. The event fulfilled one of Edwards’ campaign promises to lower the prison population.
But it took a bipartisan effort in a Republican-controlled Legislature to get the bills passed.  Supporters of the legislation called it an “historic achievement.”  They applauded both the scope of the overhaul as well as the cooperation between Republicans and Democrats that it took to enact the changes.
“I’m signing these bills because a broken justice system leads to more crime not less.  Today we  begin building the system we want rather than continue to settle for the system we have,” Edwards said in signing the bills.
The new laws challenge the agenda of President Donald Trump and Attorney General Jeff Sessions who recently called for maximum sentences even for low-level drug offenders. More Louisiana inmates  are serving time for drug possession than any other crime.
But Republican legislators, who are in the majority, seemed less focused on pressure from Washington than state budget concerns and shared a belief that Louisiana’s “tough on crime” mentality has not been effective.
The new laws expand probation and parole opportunities and shrink sentences, mainly for non-violent offenders.  They also ease financial burdens inmates face upon release.
Louisiana spends about $700 million annually  on correction costs, a huge chunk of change for a state that is always battling budget problems.
In total, the legislation is projected  to reduce  the state’s prison population by 10% over the nest decade.  The savings generated is projected to be $262 million with 70% obligated for programs to support rehabilitation and support victims.

More in this category: « Congressman Tauzin says US fractured into extremes, where are the moderates? Trump should run vs Vicious McCain, Flakey Flake, Do-Nothing-Congress »
back to top