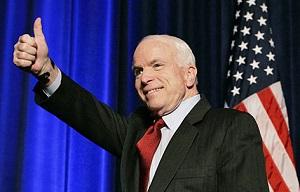 After eight years of promises, the GOP controlled U.S. Senate betrayed their supporters and voted to continue the nightmare known as Obamacare. While the media cites polls that show Obamacare is supposedly popular, most Americans know the truth about a program that has been a disaster.

Despite President Obama’s frequent claims that the “Affordable Care Act” would help lower premiums and give Americans more choice, the opposite has occurred. Instead of providing relief to struggling Americans, the U.S. Senate listened to the special interest groups and refused to act. In the end, vicious Trump hater, U.S. Senator John McCain (R-AZ) cast the deciding vote to save the Obamacare monster.

In the aftermath, Senate Majority Leader Mitch McConnell (R-KY) said it was time to “move on.” Other Senate Republicans are echoing the leader’s remarks, despite the President’s exhortation that the Senate try again.

This should be a wake-up call for President Trump. He will not be able to get anything of substance through the Congress. The GOP has only a slim majority in the Senate and there are too many moderate Republicans who can’t stand President Trump.

For example, Senator Jeff Flake (R-AZ) is now peddling a book which calls for Senate Republicans to stand up to the President. He said the party is in “denial” about President Trump and has given in to harmful impulses like “nativism” and “protectionism.” Clearly, Flake believes President Trump is damaging the GOP brand and needs to be stopped.

With friends like Flake and McCain, Donald Trump doesn’t need enemies. At this point, the President should run against a “do-nothing” Congress, much like President Harry Truman did successfully in the election of 1948.

With an anti-Congress strategy, the President may be able to elect more favorable Republicans in the 2018 mid-term elections./

Clearly, the President needs reinforcements. Every Democrat is united against his policies and too many Republicans are “Never Trumpers.” With this environment, it is easy to understand why so many of the President’s campaign promises are unfilled.

While the GOP technically controls Congress, the Democrats are still calling the shots. Democrats are preventing the Trump agenda from being approved, pushing for hearings into the “Russian” collusion nonsense and delaying confirmation for dozens of President Trump’s appointments to his administration.

Some will claim that the President should just move forward to tax cuts. However, once the Senate rebuffed Obamacare repeal, the prospects for significant tax cuts or an even an infrastructure bill look quite dim.

It is time for President Trump to just ignore the Congress and focus on doing what he can through executive actions. Already, he has made a tremendous impact through cutting regulations, ending the U.S. involvement in the Trans Pacific Partnership and the Paris Climate Accord. By approving the Keystone and Dakota Access pipelines, the President has set the U.S. on a course toward energy independence.

His actions as President have been well received by the financial markets. Along with the record setting stock market, consumer confidence is rising, the unemployment rate is down, the home ownership rate is increasing and the nation’s gross domestic product (GDP) rose a healthy 2.6% in the last quarter. Our trade deficit has started to decrease, as well as the nation’s federal debt. All of this has happened in a low inflation environment with very low gasoline prices.

The economy is responding positively despite the do-nothing Congress. Thus, the President should continue taking effective executive actions that will spur economic growth. In addition, he needs to continue to use all the communication tools at his disposal, including social media. It is his way to circumvent the filter of the fake news and deliver a message directly to the American people.

Eventually, the President needs more supporters in Congress who will help him implement his full agenda. Unfortunately, that will not happen until after the 2018 mid-term elections. In the meantime, President Trump should do as much as possible on his own because this do-nothing Congress is not ever going to help him.

More in this category: « Louisiana, Prison Capitol of US, World challenges Trump, Sessions with laws Sanders: Trump weighed in on Don Jr. Russian statement »
back to top