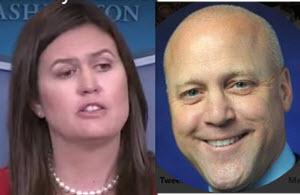 At least, less trust than she would have compared to one of Donald Trump's appointees, Thomas Homan.

Homan's name is being thrown around as a possible Secretary of Homeland Security.

The issue arose today when a reporter asked Sanders about statements made by Landrieu earlier today. Landrieu was asked asked--in his capacity of President of the U.S. Conference of Mayors--about prior comments previously made by the acting director of U.S. Immigration and Customs Enforcement, Homan.

The topic was whether certain local law enforcement agencies were doing their jobs in relationship to illegal immigrants. Homan criticized the local officials, Landrieu took issue with that criticism.

After Sanders discussed Honan's broad background, she was asked if she trusted Homan's opinion more than she would Landrieu, Sanders paused, smiled, laughed and then said "I think that's pretty safe to say":. .

Here are the background facts:

On June 28, Homan said, ““When some law enforcement agencies fail to honor detainers or release serious criminal offenders, they—it undermines ICE’s ability to protect public safety and carry out its mission. Most work with us, but many don’t in the largest cities, and that is where criminal aliens and criminal gangs flourish,"

Mayor Mitch Landrieu of New Orleans, president of the U.S. Conference of Mayors, let the  acting director of U.S. Immigration and Customs Enforcement, Thomas Homan, know he's not on the same page when it comes to illegals.

At a press breakfast hosted by the Christian Science Monitor Wednesday morning, Mayor Landrieu was asked: “What is your reaction to this statement, and will you cooperate with ICE?”

As quoted by Newsmax

“First of all, he’s just wrong,” replied Landrieu, who has been recently mentioned as a Democratic presidential hopeful in 2020. “That kind of rhetoric is really not helpful, especially from that particular podium. I'm not aware of any mayor or any police department that releases violent criminals on the streets of America."

He went on to specifically criticize Homan, saying “Our No. 1 priority is taking violent criminals, especially those people in gangs, off of the streets. But, guess what? If you look at all of the numbers, it's not just in the immigrant community, it's in our communities as well.”

“Our police officers keep the streets safe irrespective of immigration status and we do so all the time."

“We want to continue to constructively communicate, but they have been vague about what they want, how to execute it, and the resources to get that done,” said the mayor. “We are here. We continue to want to talk.”

“Heightened rhetoric does not help constructive solutions to problems that are real for us,” said Landrieu.

When asked about the statements made by Mayor Landrieu, ICE’s Spokeswoman, Jennifer Elzea, told Newsmax, “I think Acting Director Homan’s comments speak for themselves.”