Mitch Landrieu using US Mayor’s platform as his own monument 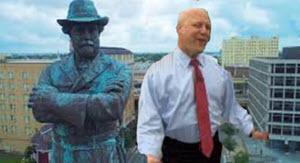 What does one in today’s world when their name is brought up right in the middle of a Presidential press conference?

Which is what New Orleans Mayor Mitch Landrieu did yesterday.  His took to twitter after he became the brunt of a public “diss” by no less than the press secretary for the most powerful person in the world.

Landrieu responded to the somewhat national rebuke with his own less than 140-character slam after    when a reporter questioned President Trump’s Press Secretary Sarah Huckabee Sanders on the matter whether she trusted the acting Director of ICE more than Landrieu.

Landrieu, as Mayor and as President of the US Conference of Mayors organization has taken issue with Trump and his immigration policy.

Of course, by including Sanders tag in the tweet, he obviously wanted her and the world to know that it’s violent crime that’s hurting the cities, not illegal immigration.

New Orleans is in the throes of a major heat wave of gunfire and once again is competing for the honors of Murder Capital of the World.

However, as Landrieu and Team Trump wrestle on the US political platform, the New Orleans Mayor’s flank has become a visible target of ridicule.

For many back home, just the notion that the mayor is spending even a milli-second battling their popular President (at least in these parts), is, well, a crime against the nature of things.  Certainly, his traditional foes yet now many current and former supporters of the Mayor are still red-faced angry with him over his lead role in removing the confederate monuments.  I imagine a crowd as large as one might see on Mardi Gras day would emerge to see him run up the now-vacant General Lee Circle obelisk which casts an empty shadow over St. Charles Avenue.

Just the very notion that Landrieu is speaking on behalf of any organization instead of fighting the violent crime running rampant in the post-Katrina city is enough to send Facebook abuzz with anti-Mitch epitaphs whenever his name appears in a thread.

Worse, they see using their beloved city and his new national megaphone as a long-shot ticket to the next Democratic Party presidential nomination.

The more he speaks, the more frequent he tweets about non-crime-related issues, the higher the anti-Landrieu temperature rises.

Landrieu finds himself in a two-front war, one nationally against the King of Twitter Trump and another against those who feel abandoned.

Taking on an equally unpopular President is a great way to get noticed.

On St. Charles Avenue and on the new national debate field known as Twitter.

More in this category: « TP columnist right on Edwards, wrong on Georges and The Advocate Mutinous GOP & Mueller sees Trump as Bounty so White House prays »
back to top