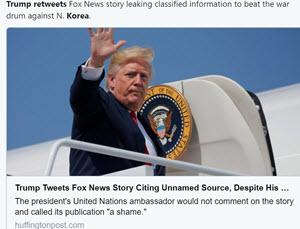 If only the truth would come out but, oddly, Trump continues to attack the one man who could prove him right, that it’s all bogus. That man is Special Counsel Robert Mueller. Americans are optimistic people. We want to believe our president no matter his party. Sadly, this President is unwilling to let the Mueller investigation run its course. Trump is walking on the edge of a precipice that could lead to nuclear war with North Korea but all he can talk about is the election.

The Democrats lost the election fair and square. That’s an unassailable fact. It shows the flaws of the Electoral College but that’s a debate for another time. Democrats aren’t talking about Russia to overturn the “big election because they haven’t got anything else to talk about.” There’s plenty else to talk about, like health care, the wall, tax cuts, the environment and infrastructure. If Trump ever listened to himself he’d get the point that he’s talking to himself. Maybe that’s whom he’s trying to convince.

The big news, today, is North Korea’s miniaturization of nuclear weapons capable of being mounted on ICBM missiles. If anyone thinks that’s fake news they’re deluded. Kim Jong-un has made development of such weapons a primary objective of his leadership. There are citizens in that country who are eager for war to get it over with because the focus of the Hermit Kingdom is on war with the United States.

Sanctions are unlikely to do much because North Korea could care less about its people, their welfare, or the hardship that sanctions might impose on the population. Kim is a young man with no term limits whose notions of war were not shaped by WWII. To him, nuclear warfare may be something that takes up space in history books. He may think the U.S. is the paper tiger the North fought to a draw during the last conflict between our two nations.

The talking heads are obsessed with how Trump will respond. Will he tweet? Well, we didn’t have too wait long.  The President, on his non-golf-playing, non-vacation has answered this question.  He has retweeted Fox News article on the North Korea nuclear issue predicated upon an unnamed source.  His own UN Ambassador condemned the release of the report appearing to contain classified information.  Guess, she didn't get the message?

How much potential classified information will he release or retweet in the midst of a very early morning tantrum? If the President is unwilling, or incapable, of listening to the generals he put in the White House, recently, he should call it a day. In most countries military officers close to power is a danger. In America they may save democracy.

More in this category: « 17 get LABI perfect score 100: Billiot, Connick, Thomas, Miller from N.O. region "Men-boys" Trump and Kim take us to a Ground Zero with Guam, "fire and fury" speak? »
back to top