"Men-boys" Trump and Kim take us to a Ground Zero with Guam, "fire and fury" speak? 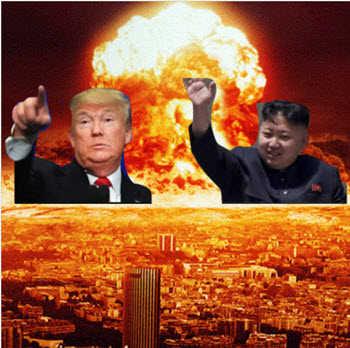 Don't meant to make light of possible doom and gloom.

But, the major question I’m asking at this point is:  Will President disrupt his golf vacation now that we have the makings of a real worldwide disaster?

And another, perhaps more philosophical query comes to mind: How the heck did we get into this situation? We have the most powerful man in the world behaving like a six-year-old child and his now nuclear counterpart Kim Jong Un of North Korea, looking like a pyromanic punk rocker using dynamite for his background theatrics.

"Men-boys" Presdient Trump and North Korea's Kim take us to a Ground Zero with Guam, "fire and fury" speak?

Think about it: We have the President with absolutely no military or foreign policy experience, but thankfully, we do have the sharp experienced minds of Ivanka and Jared to assist him with world affairs.  He has rattled the world and sharpened his saber with comments such as “will be met with fire and fury like the world has never seen” after retweeting an article based upon an unknown source.  Of course, he also told us that we would never have nukes on his watch, too.

On the other hand, we have reports that the other kook on the other side of the planet, Kim is threatening to shoot a missile at Guam.

So, what should the rest of us do in trying to figure out which belligerent leader is nuttier?

Maybe nuttier is an overstatement.  After all, Trump has a penchant of saying and tweeting things in hyperbole such as “greatest president ever” or “largest crowd ever”.  Maybe we should all be like Senator John McCain who reportedly said today- ““I don’t pay much attention anymore to what the president says because there’s no point in it,. It’s not terrible what he said, but it’s kind of the classic Trump in that he overstates things.”

And perhaps Kim really doesn’t real mean Guam at all, but meant the word "gum" as in blowing up a bubble.  Or, perchance he had to say something to counter Trump's fire and fury type of rhetoric.

Still, there is a certain sense of panic all of us must fear that two men-boys are in control and that could bring us to the point of "Ground Zero".

What is "Ground Zero"?  Most of it know it as the hellish streets of New York City after the horrors of September 11th.  The great minds at Merriam-Webster has a more formal definitiion, "the point on the earth's surface directly above, below, or at which an explosion (especially a nuclear explosion) occurs"

What got me thinking of "Ground Zero" today is when I received an email from that organization that I thought articulates the real problem we're now facing.   After reading it, consider this--President Trump could order the first nuclear missile strike in over seventy-years as he drives his cart on top of the greens of hole three at his posh Golf Course in New Jersey:

According to several reports published earlier today, North Korea has successfully produced a miniaturized nuclear warhead designed to fit inside its missiles. Hours after the news broke, President Donald Trump warned that continued threats by North Korea “will be met with fire and fury like the world has never seen.”

In reaction to this unfolding crisis, Derek Johnson, the Executive Director of Global Zero, the international movement for the elimination of nuclear weapons, issued the following statement:

“Kim Jong-un’s nuclear capabilities are coming into alignment with his rhetoric. The situation on the Korean peninsula has evolved into a full-blown crisis and the Trump administration needs to immediately come to grips with that. That means putting an end to the President’s escalatory bravado and immediately opening a direct line of communication with Pyongyang, without preconditions. Talking risks nothing; not talking risks everything.

“The public must come to grips with the gravity of this crisis, too. We’ve got two nuclear-armed megalomaniacs facing off and no reason to expect cooler heads will prevail.

“When Trump promises ‘fire and fury,’ remember he has unfettered authority to make good on that threat. The nuclear briefcase follows him everywhere. At any moment he can pick up the phone and order a nuclear strike. The system designed to execute that order was built for blind deference and speed; we shouldn’t pin any hopes on having ‘an adult in the room.’ Neither his subordinates nor Congress can stop him.

“Within minutes of Trump giving the order, nuclear missiles will fire from the submarines that carry them. There will be no calling them back; they’ll reach the Korean peninsula in 15 minutes. Even without a retaliatory strike — which would almost certainly kill tens of thousands of people in the region, including deployed American forces — the death toll would be horrific and far-reaching.

“The potential consequences of a military confrontation between the United States and North Korea can’t be overstated. Every diplomatic effort must be made to avoid any scenario that risks the use of nuclear weapons. The time for crisis talks is now.”

Earlier this summer, Global Zero’s Nuclear Crisis Group released a set of urgent recommendations to avoid the use of nuclear weapons and called on national leaders to act now to reduce the unacceptably high risk of nuclear conflict. The report called for the United States and North Korea to begin immediate discussions, without any preconditions, to reduce the risk of conflict. Full denuclearization through the “Six Party” process, including a freeze on nuclear and missile tests, production of nuclear materials, suspensions of military exercises, and negotiation of a formal peace regime will take time, but must not be allowed to prevent urgently needed discussions to avoid escalation of nuclear risk.