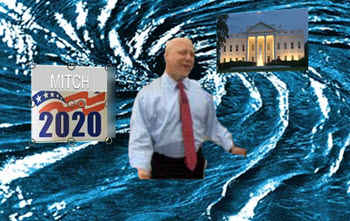 First and foremost, the Mayor should have been giving more attention to the crime problem in New Orleans. The murder rate has been increasing in recent years as the number of police officers has been declining. The Mayor appoints the Police Superintendent and has overall responsibility for the operation of the police department and the safety of the citizens of New Orleans. Clearly, he has not fulfilled his responsibilities in this critical area.

This week, the damaged reputation of Landrieu took an even greater blow when his administration lied to the people of New Orleans about the causes of massive flooding. On Saturday August 5, some areas of New Orleans received over nine inches of rain, a significant amount that was made worse due to inoperable drainage pumps. The resulting damage to homes, businesses and automobiles negatively impacted thousands of New Orleans residents.

New Orleans is prone to large rainfall events during the spring and throughout hurricane season. The city sits below sea level and is protected by a complex system of drainage pumps operated by the Sewerage and Water Board. After Hurricane Katrina battered New Orleans in 2005, the federal government sent billions of dollars to New Orleans for improved flood protection, better drainage systems and enhanced levees. In the aftermath of the flood Saturday, there needs to be an accounting of how all of those dollars have been spent.

At first, the administration blamed the flooding on “climate change,” which was a ludicrous and pathetic dodge. Cedric Grant, the Executive Director of the Sewerage and Water Board, floated the “climate change” excuse to cover up his own ineptitude. While assuring residents that the drainage pumps were operating at full capacity, in reality, many were undergoing maintenance at the time of the storm. At first city officials claimed that 8 pumps were not operating, then it was announced that 14 were not in service and now they are admitting that 16 pumps were off line while the storm battered New Orleans last Saturday.

The President of the Sewerage and Water Board is Mitch Landrieu. His administration hired Cedric Grant, a career bureaucrat, to lead the agency. Grant was selected over engineers and hydrologists with years of pertinent experience. In the aftermath of this debacle, Grant announced his retirement, but he will continue to collect his $210,000 per year salary until the end of hurricane season in November. Don’t shed any tears for Grant, for he will retire with a $175,000 per year pension that also includes full health benefits.

Landrieu also forced two other Sewerage and Water Board officials to resign and his Director of Public Works. He blamed these officials for their lack of candor with the public and their poor response to the storm, but at least they were in New Orleans while the catastrophe was occurring. Last Saturday, Landrieu was attending a “security conference” at the Aspen Institute and did not bother to address the people of New Orleans until two days after the storm.

In effect, Landrieu placed his Aspen Institute conference above the citizens of New Orleans. Any true leader would have taken the next flight back to New Orleans to direct the city government’s response to the flood. Instead, Mitch Landrieu hid behind his administration officials and when they failed to meet expectations, he blamed them, fired them and tried to convey to the citizens a false image of engaged leadership.

In essence, Landrieu is a fraud. He is a self-serving politician looking for his next political position and not serving his constituents who he was hired to represent.

From the crime to the poor street conditions to the flooding woes, the country has now been exposed to the real Landrieu record. Even deranged Democratic Party leaders will not be foolish enough to trust their presidential nomination to someone who cannot keep his city safe from either criminals or flood waters.

Sadly, for the Mayor, as the flood waters finally drained away, so did his presidential ambitions.