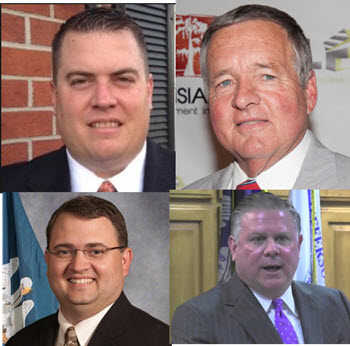 For decades, when you mentioned the words Jefferson Parish, there was at least one name that probably crossed the mind, none other than “Chehardy”.

Lawrence A. Chehardy (for eleven years) and then his son Lawrence E. Chehardy dominated the Parish as its’ assessors.  During this forty-five year period, while other prominent political names came and went, the Chehardy’ brand remained as a powerful Jefferson Parish institution.

In 2010, after serving thirty-four years in that powerful Assessor position, the younger Lawrence C. Chehardy opted to end his role as a public official, become a private citizen, continue his law practice Chehardy, Sherman, Williams Law Firm and write about politics (his commentary has appeared since then on Bayoubuzz.com and you can read it on LawrenceChehardy.com).

When prospective candidates wanted to run for or even maintain their elective offices, his endorsement was almost always sought and cherished.

After John Bel Edwards defeated David Vitter, the new Governor asked Lawrence C. to be the Chairman of the Louisiana Tax Commission, a logical appointment for Chehardy and for Louisiana, since that role involves the judicial appeals of contested assessments.

On Friday, Chehardy and I discussed a number of issues in a Bayoubuzz Facebook Live discussion, including the upcoming elections in Jefferson Parish—for Sheriff and for City Council.

Below is the transcript of his comments in that segment..

Jefferson Parish first well just embarrassing as you well know is in the throes of which you could call a political upheaval with the recent announcement by Sheriff Newell Normand that we'll be stepping down at the end of this month.

Jefferson Parish will have a new sheriff Joe Lopinto.  Newell Normand is probably the most influential, probably he is the most influential public official in Jefferson Parish, and as you and I have discussed before politics abhors a vacuum.  So with his stepping aside at the end of this month there will be a vacuum in parish politics that obviously somebody will fill but the question right now is who that person may be.


Well I think probably the two the two most likely candidates at this time I would would be our new sheriff who will be Joe Lopinto and possibly the District Attorney Paul Connick.   Paul has kept a relatively low profile in public office but nonetheless as as District Attorney he's in a powerful position--so he certainly could fill that vacuum.   Joe Lopinto as sheriff could also readily fill that vacuum.  So those are probably the two most likely individuals to to step forward and fill the shoes or fill the shoes that Newell Normand is leaving behind.


That that kind of points to what I said about you know Paul has been a good District Attorney but has kept a low profile.  Now he has gottem involved in politics and supported candidates, he's a great fundraiser, and has influence.   But he has not been as active politically say as Newell Normand has been or even as I was back in my day.   But he certainly is someone who could step up and fill that void.

John Young is out of office right now and certainly to fill that kind of vacuum that individual would most likely have to be in public office.  John is talking about the possibility of running for sheriff although I seen him more likely as a candidate for a Parish president in two years but you know we'll see.  You know time will tell.

Let me clarify one thing though..like somebody filling this vacuum, you know what I'm talking about is is Joe Lopinto as sheriff or Paul Connick as District Attorney or someone like that and in that position--obviously Paul Connick is not going to be running for sheriff, but you know somebody in the position that colorful would be you know would be would be a likely person to fill that making that void.

We've got a big Council race calling a lot of Jefferson Parish to fill the seat vacated by Ben's Zahn--when he became mayor of Kenner--two candidates there, senator Danny Martini is running as well as Dominic Impastato who's currently a first-term councilman on the City Council in Kenner.   That should be a real dogfight so to speak.  People in that district are going to have a choice to make as to you know which man they want to serve them till the next election on the parish council but it should be a real interesting race and an interesting to watch.


The election for that race will be October 14.  That's still still a good ways off, it's about two months away but the candidates campaigning now, and you know working hard, so the excitement if you want to call it that in the campaign probably won't start until after Labor Day when the real intensity will start.  There's obviously campaigning going on right now but the intensity of it with radio and TV and Direct Mail and that sort of thing probably won't happen until sometime after Labor Day.

More in this category: « Mitch Landrieu's Presidential hopes down the drain with flood Trump's Putin, Charlotteville responses feed into question: WHY? »
back to top