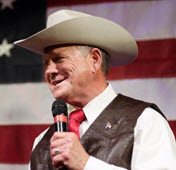 Senate Majority Leader Mitch McConnell (R-Ky.) called on the party's nominee for Senate in Alabama, Roy Moore, to withdraw from the race if a new report that he pursued teenage girls in his 30's is true. The decades-old claim has been brought by a lady who was 14 years old at the time of the alleged illegal touchings.
John McCain has
The allegations against Roy Moore are deeply disturbing and disqualifying. He should immediately step aside and allow the people of Alabama to elect a candidate they can be proud of.

The Washington Post published the story
Twitter has been lit up with the controversy, including one post that asked whether Fox News will pursue the claim as aggressively as it did the Harvey Weinstein story. Conservatives had slammed democrats and liberals for not being public in its condemnation of Weinstein once the story broke, especially Hillary Clinton, who had been a campaign contribution recipient.
In response, the Alabama State Auditor Jim Ziegler has said that Roy Moore is like the parents of Christ. “Also take Joseph and Mary. Mary was a teenager and Joseph was an adult carpenter. They became parents of Jesus.”
Ziegler also said, “There is nothing to see here. The allegations are that a man in his early 30s dated teenage girls. Even the Washington Post report says that he never had sexual intercourse with any of the girls.”

HAS ANYBODY SEEN THE OBAMACARE MANDATE REPEAL?
According to Politico, the House of Representatives tax overhaul does not a repeal of the Obamacare individual mandate. President Donald Trump supported doing away with the mandate, a way to expedite the explosion of the Affordable Care Act, by defunding it. The Senate bill released today reportedly also does not include it.
Read more here.