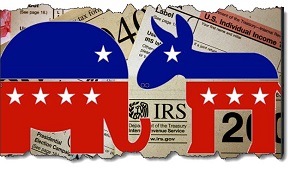 With President Donald Trump hours away from a major victory in the US Senate on the issue of tax reform, the full court press to defeat it or pass it, is on.

Republicans in the Senate are scheduled to vote today on a tax bill designed to benefit the top 1% and corporations, not the middle class. If a tax increase wasn’t enough, families all across the country depend on Medicare, Social Security, education and housing programs – which will see drastic cuts in funding if this tax plan becomes a reality. Despite Republicans’ claiming to be the party of fiscal discipline, their bill would increase the deficit by $1.4 trillion over the next decade, according to the nonpartisan Congressional Budget Office. Editorial boards agree: this bill would increase taxes on, and take billions from, the middle class, while giving massive tax cuts to the wealthy and big corporations.

See the coverage below:

Des Moines Register: GOP's $1.5 trillion tax plan is not a 'victory' for Iowans

“The 2001 and 2003 tax cuts under former President George W. Bush didn’t pay for themselves or unleash some magical economic growth. They put the country further in the hole. Even the most modest analysis by the nonpartisan Congressional Budget Office estimated the 2001 cuts contributed more than a trillion dollars to the national debt in the first 10 years, not including the effect of paying interest on the debt.”

“Rob Portman has been at the front in making the pitch for this ill-conceived and misdirected tax bill. He knows better, as he did in the earlier health-care debate. Yet he has chosen against a responsible show of public independence, one signaling to millions of Ohioans that he is on their side.”

“Every Kansan knows what happened after Gov. Sam Brownback’s 2012 cuts did away with the state income tax for some 330,000 business owners. The governor kept insisting — and in fact, still does — that robust growth and woohoo, jobs galore would result. When that didn’t happen, elected officials kept having to dip into funds set aside for highways and schools just to balance the budget. Finally, this year, lawmakers overrode a Brownback veto and at last repealed the LLC tax break and raised income tax rates.”

“The CBO’s latest report projects that the Senate Republican tax bill would open a $1.4 trillion hole in the budget, and that — as we will explain in a moment — is an understatement. Throughout the tax debate, Republicans have insisted that the tax cuts would lead to such robust growth that they would pay for themselves. This is a dangerous fantasy. There is no evidence or credible economic projection justifying GOP claims — nothing but wishful thinking.”

“The biggest tax breaks on income would go to the rich, but the GOP tax plan also favors the very wealthiest Americans in other ways. The estate tax, most offensively, would be eliminated entirely under the House plan, meaning billions of dollars in inherited wealth could be passed down through generations untouched by the taxman, creating a new American aristocracy of unearned fortune.The GOP tax plan is excellent if you believe that the richest 1 percent of Americans, who own 40 percent of our nation’s wealth, are not doing well enough. But it is an insult to the notion that American capitalism rewards hard work, risk-taking and brains, not bloodlines.”

“The Republican-led tax reform plan – called by many Democrats simply a “tax cut” plan for major corporations and the super wealthy – has the backing of President Donald Trump and seems poised for a Senate vote soon. The bill would drastically cut the corporate tax rate, and the Senate plan would also include a sort of “back-door” plan to repeal the Affordable Care Act by doing away with the requirement that people buy health insurance or pay a fine to the Internal Revenue Service.The tax plan, as currently written, would also add an estimated $1.4 trillion to the federal budget deficit over the next decade.”

The Billings Gazette: New GOP proposal is easily the most un-Republican tax plan ever

“Any Republican who is truly fiscally conservative would never agree that going into debt to give tax breaks is a prudent course of action. Using even the most basic of business principles, a business wouldn't mortgage itself for nothing. And this tax bill isn't about going into debt to invest in America, it's about helping those earning more than $100,000 per year, according to CBO.So much for compassionate conservatism because this new plan makes health care nearly unobtainable for lower-income families. Because poor people would receive less government aid, it would mean that they would have to pay out-of-pocket for health insurance, making it all but unreachable.”

The New York Times: The Senate Is Rushing to Pass Its Tax Bill Because It Stinks

“Like the House tax bill, the Senate measure would change how the government adjusts tax brackets and other tax provisions for inflation, replacing the Consumer Price Index with the Chained Consumer Price Index, which tends to increase at a slower rate. While most taxpayers would not notice an immediate impact, the effects would compound over time as more low- and middle-income families are pushed into higher tax brackets, and as working families receive less help through benefits like the earned-income tax credit.”

“Portman needs to leave his ivory tower and confront these realities. The Senate bill as currently drafted will hurt lower- and middle-income Ohioans by eliminating the Affordable Care Act’s health insurance mandate and the federal health-insurance supports that go with it, and by eliminating the deductibility of local and state taxes. Ohio’s junior senator also needs to face up to the grim implications of a GOP tax bill that kicks out some of the supports for higher education -- particularly troubling in undereducated Ohio.”

“This hyperpartisan bill is not worth the effort. It would blow out the federal deficit and interfere with the delivery of healthcare to pay for an economically unjustified tax cut that goes mostly to wealthy individuals, families and corporations. This is not a time for tinkering – it’s a time to start over. When the bill comes up for a vote this week, we hope Collins will say “no,” and convene a serious effort to build a bipartisan tax reform bill designed to help the people who really need help — the nation’s struggling middle class.”

Bangor Daily News: Senate needs to slow down and fix its tax plan if they truly want to help middle class

“Numerous analyses of the proposed Senate tax plan, which is not finalized, and a plan passed by House Republicans earlier this month have found that the plans’ benefits flow mostly to rich Americans and large corporations and that many average-income Americans will pay higher taxes in a decade. One reason is that while corporate tax cuts are permanent in the legislation, tax changes for individuals and families will expire. In addition, the plans will grow the deficit by about $1.5 trillion over the next 10 years, which will require cuts in government spending for programs like Medicare. A major Republican argument for the tax cuts is that they will pay for themselves by stimulating the economy. In a survey by The University of Chicago’s Booth School of Business, 35 of 37 economists said this won’t happen. The two who disagreed later said they misunderstood the question.”

The Philadelphia Inquirer: Why the Republicans' magical tax plan needs to disappear

“The GOP plan would cut the corporate tax rate from 35 percent to 20 percent and repeal the alternative minimum tax and the estate tax, further lowering the bills of wealthy taxpayers. While those breaks would come with no strings attached, rate reductions proposed for individual taxpayers would cost them almost all itemized deductions, including for state and local taxes.”

The Republican National Committee, obviously, has a different take:

ICYMI: Democrats were for tax reform before they were against it

Senator Sanders, who can't explain the difference between a socialist and a Democrat on tax policy, will defend the left's vision on tax reform.... Continue Reading »

ICYMI: Conservative tax reform is on the way

If the Republicans’ tax reform is so bad, why do Democrats keep lying about it?... Continue Reading »

Benefiting From It For Years, McCaskill Fights To Keep The Tax Code Status Quo

Senate Democrats have supported key components of the Senate tax relief bill in the past, which they now conveniently oppose…... Continue Reading »

More in this category: « Poll: Sex allegations against Franken, Roy Moore; Trump vs. Sanders HILLYER: Republican National Committee should disband due to its Roy Moore support »
back to top