Second Amendment backers take aim at Freedom of the Press? 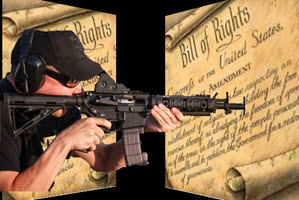 by Tom Aswell, Publisher of LouisianaVoice

As I listen all the gun rights advocates voicing support of the sacred Second Amendment, I find myself wondering how we have reached a point where their noise is allowed to drown out the pleas for common sense gun laws, i.e. bans on assault weapons, bump stocks, thorough background checks, etc.

The NRA, with its lobbying prowess and its purchase of members of Congress, has taken over the debate and its sycophants are lined up to chant a-la the Stepford Wives the gospel of the rights of the gun owners, supposedly represented by sportsmen who go out in search of big game in order to put meat on the family table.

All too often, however, the true sentiment is more accurate expressed in more realistic terms:

For a clearer image of this decal, I pulled this from an online website:

When, in the wake of the Parkland shootings that left 17 dead, Donald Trump incredulously said we should “take the guns first, go through due process second,” (something even the most diehard advocate of gun control has never said), his conservative BASE went into a state akin to apoplexy, and rightly so.

Of course, to paraphrase Mark Twain’s comment about New England weather, if you don’t like what comes out of Trump’s mouth, you need only wait a couple of minutes because his position is certain to change. There appears to be no limits to his imbecilic utterances and actions.

Yes, the Second Amendment clearly says, “A well-regulated militia, being necessary to the security of a free state, the right of the people to keep and bear arms, shall not be infringed.”

There’s no debate about the wording but there is nothing in that that says we have an unlimited right to any and all types of arms. In fact, when the Second Amendment was adopted, there were no such things as assault weapons, grenades, land mines, tanks, missiles.

But no one—NO ONE—would argue to take away your rifle, your double-barrel shotgun, or your Colt 45 six-shooter. So, let’s clear the air of that silly argument.

But while gun rights advocates hold up the Second Amendment as the holy grail of the Spirit of Freedom and the American Way, there’s another amendment those same people seem to conveniently overlook:

“Congress shall make no law respecting an establishment of religion or prohibiting the free exercise thereof; or abridging the freedom of speech, or of the press; or the right of the people peaceably to assemble, and to petition the government for a redress of grievances.”

What we have instead is a growing chorus of “fake news” echoed by the Trump base because, like Trump, their vocabularies are so painfully limited and their intellect, like their dear leader’s, so mired in simple banalities that they can only parrot his talking points—talking points that, it turns out, were field tested by an outfit called CAMBRIDGE ANALYTICA.

How’s that for irony: cries of fake news prompted by a foreign company that coined the phrase?

But never mind all that: the term fake news has been so popularized by Trump that it’s caught on with such LUMINARIES as Venezuelan President Nicolas Maduro, Syria’s Bashar al-Assad, the Chinese state media, the Russian foreign ministry, Spanish foreign minister Alfonso Dastis, and others of similar stripe.

Now we even have politicians trying to turn the phrase into attempts at CENSORSHIP, a movement every bit as dangerous as any perceived threat to gun ownership.

Had there been censorship;

There are many, many other examples—far too many to list here—that illustrate how a free press has contributed to the well-being of Americans. So, to all you out there who have obediently latched on to the FAKE NEWS term as your rallying cry, you’re in good company. You should be proud of yourselves for being able to think for yourself and for being able to express your individuality in the same way as the rest of the Trumpettes—just like Cambridge Analytica intended.

But it remains a mystery to me how 35 percent of the people in the most advanced nation on the face of the earth can remain so inconsistent in supporting one amendment to the Bill of Rights, a doctrine you have elevated to sacred status, while at the same time belittling another of those same amendments.

Yet we have ELECTED OFFICIALS taking up the call of fake news any time there’s a news story with which they do not agree or that puts them in a bad light.

We are not perfect in the press, far from it. In fact, I recently misinterpreted the intent of a bill by State Sen. Dan Claitor and pilloried him for it when in fact, I should have been praising him. I thought his bill was a serious attempt at mandating retirement of all elected officials at age 70 when in fact, he was trying to show the hypocrisy of the law requiring that all judges retire at 70.

But despite our occasional shortcomings, FREEDOM OF THE PRESS is every bit as important to the ability of Americans to remain free as the freedom to bear arms. Period.

If you can’t agree with that, you are a hypocrite in every sense of the word.

The worst kind of hypocrite, in fact, because you’re lying to yourself.