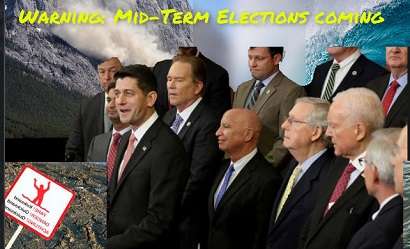 A landslide loss of historic proportions? A blue wave ready to engulf America?  Are the warning signs currently present that should tell the Republican party nationally to be ready to embrace the worst?

According to two political observes, John Couvillon of JMC Polling and Analytics and Louisiana Weekly’s Christopher Tidmore, the wave is real, the landslide can be devastating and the Republicans better embrace mid-terms reality.  That reality is that all of the signs are there for a cataclysmic change in Congressional politics.

On Wednesday, both politicos discussed this issue during a Bayoubuzz video discussion.

While the 2016 elections taught us, more than ever, that early polls are relative meaningless and political sympathies and motivations can turn on a dime, both Tidmore and Couvillon looked to other factors rather than polls to issue their dire warnings to the GOP.

Below is the transcript to part one of this discussion. Also, below is the complete video. This segment begins at the 3:45 mark on the video and ends at 9:45

TIDMORE: The Arizona congressional race was very telling and very big when you've got a district that Trump won by over 20 points and the Republican barely gets five and a half points over the Democrat 53-45, 52-48 basically,change--there's a five-point race yeah-- it's a five-point race, you've got that means,Steve, there are a hundred and forty-seven Republican held seats in the United States that Trump one less decisively then he won the Arizona seat.  Now when you factor that there are 55 swing districts in the country only five are held by Democrats, there are twenty seven seats the Hillary Clinton won that Republicans hold, I mean if ever there was an indication of a blue wave that's it.  That's dangerous territory, that's territory which borders on saying goodbye to Jeff Flake's seat in Arizona. It's a gone pecan. That's saying that Heidi Heitkamp may have a shot in North Dakota. That's saying the Democrats may not just have a shot of the house for the Senate and John's a better pollster on that.

COUVILLON: Thank you, thank you Chris, yeah, there's what I like to do when we're talking about the discussion of 2018, I'm actually going to go outside of the box and not even talk about polling per se, I'm going to use other data points. More specifically I'm interested in four things in terms of determining whether and/or how big the wave will be. I personally think it'll be huge as in 2006 and 2008 size huge. I'm more interested in looking at number one voter registration changes; Number two evidences of partisan enthusiasm from Democrats; Number three retirements and number four special elections.

COUVILLON:  I'll start off with the easy one voter registration change.  Ironically and this one data point I don't see any discernible movement towards the Democrats since Donald Trump's inauguration, in fact, what has happened is that there's actually been more of a decrease in registered Democrats than registered Republicans in the states that have party registration, with independents picking up approximately 400,000 voters. Now this is nationwide in the states that do have party registration, the 23 of them I was able to find on the web.  That to me is telling that there's not necessarily enthusiasm for the Democrats per se but that's the only positive data point I found for Republicans when I discuss the other three factors, they are bad--and I will unequivocally say bad, for the Republicans--because number one when you're talking about partisan enthusiasm, thus far we've only had two primaries, Texas and Illinois.  In those two primaries, I'm a big fan of looking at party participation in primaries--it's kind of an evidence as to who's more jazzed and who is not, in a midterm or a presidential election year--In Texas and in Illinois, Democratic turnout relative to 2014 is up a hundred 18 percent.  Republican turnout is only up four percent in those two states and this kind of shame we're having this discussion now rather than a mid May because primary Palooza does start on, I believe it's Tuesday May 4th, when several states have primaries, and you have a series of primaries every week in May and June and August and September, unfortunately right now we're kind of in a lull period but just from those two states and from seeing a surge in Democratic turnout in Virginia, New jersey last year, relative to party primaries, there's something brewing out there and it's not good for the Republicans.  So that's one factor that I'd like to discuss.  The next factor when we're talking about retirements, there is a record number of Republicans who are choosing to retire this year.  The last time I saw a retirement count this bad for the Republicans, who by the way are two times more likely to retire than Democrats in the house, last time I saw the sheer volume of Republicans being this bad was in 2008, which you remember after a bad election cycle in '06 and the prospect of Barack Obama winning heavily, a lot of Republicans decided it simply wasn't worth it. In other words the psychology is let's say you have a wave election and your party loses power, you're less likely to want to seek reelection in the next cycle once you have no more power, because you can't really get much done, especially in the house--where control by one vote means you have a hundred percent of the power,

TIDMORE: And if I can throw something in John, because before I before it because I have to head out, to give you an idea of the cycle how the psychology is manifesting on this--in a seat where there isn't a retirement, but a lot of people thought Dana Rohrabacher seat in California, Congressman Rohrabacher is being--one of his former aides and close political allies is running against him and the Republicans are saying this is literally the "buzz"--are  we gonna end up--because they're 12, we're gonna end up with two Republicans in the runoff and so therefore we'll hit will hold in Dana Rohrabacher's seat-- this is a thirty year incumbent.  This is a guy who should be able to basically join the Communist Party and still get reelected in Orange County and the fact of the matter is he is the only way the Republicans are saying they could hold this seat, this is seat Hillary Clinton won but it's a historic Republican seat--I mean this is this is Bob Dornan seat, at some level originally-- is that by saying that they can they may be through some trickery of an open primary like we have here in Louisiana and I have an Oregon, find a way to get two Republicans into that runoff, and then they they'll have a Republican.  That is an admission of trending defeat in the likes of which I have never seen out of the Republican campaign, Republican  National Committee,  Congressional Committee. Never.