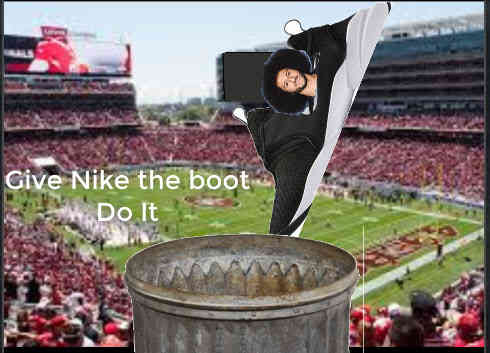 The protests turned Kaepernick into a celebrity and other NFL players joined in the offensive stunts, denigrating the sacrifice of our courageous veterans who have fought and died for this country.

The National Anthem is a great symbol of America and it should be respected by everyone. If people are not happy with this country, they should move or get involved in a constructive way to change it for the better.

Protesting the National Anthem at NFL games is not the right way to fight for constructive change. Kaepernick and the NFL players who want to protest can do so during the offseason or during their personal time, not before a football game. This stunt insults hard working fans who pay top dollar for sports entertainment, not political protests. By the way, without the fans, the NFL will collapse and the players will not be paid.

Ironically, about 70% of the NFL players are African Americans and the average salary is $2.1 million, so they are certainly not economically disadvantaged.

Nike must have known that their new “face” is controversial and divisive to say the least. Sadly, corporate leaders probably do not care about average hard working Americans. They must have calculated that this move would be popular with their target audience, younger Americans, the millennial generation.

In contrast, investors registered their opinion of the selection and Nike’s stock declined by 3% after the Kaepernick announcement. Investors were not the only ones upset as former customers decided to burn their shoes and post the videos on social media.

These protests will continue as long as the company employs Colin Kaepernick as their spokesperson. Not only did he disrespect the National Anthem, but he also wore offensive socks depicting police officers as pigs and wore a T-shirt celebrating the late Cuban dictator Fidel Castro, who was a murderous and brutal Communist tyrant, who subjected his country to decades of repressive rule.

It is very sad, that one of America’s leading companies would chose to affiliate with such an inappropriate sports figure and insult millions of Americans. This decision speaks volumes about the state of professional sports, our corporate climate and our culture.

More in this category: « No flag for Armstrong's moon walk: One Giant Insult by Hollywood New Campaigns and Elections info and E-commerce site for Louisiana and US »
back to top