Trump's pardoning in Mueller, Stormy Daniels probe could be a legal turkey 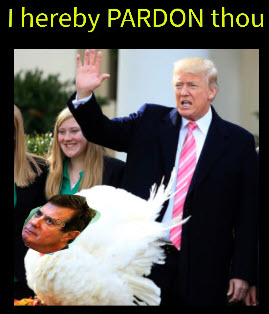 The buzzwords in the Mueller investigation today, one year anniversary of the start of the investigation is witch hunt" and "can't indict a sitting president".

Whether it is a witch hunt of not will be better determined once the investigaton runs its course. Whether a President can be indicted while serving might be an issue that could ultimately be decided by the US Supreme Court.

However, overlaying both of those questions is another very important issue being discussed on cable TV and in the news recently, namely--what could be the effect should President Donald Trump decide to pardon others being targeted by the federal government? Believe it or not, an ancillary issue is--what happens if he pardons himslf?