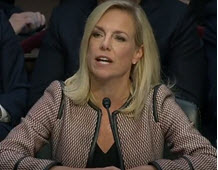 Today, US Senator Dick Durbin questioned the Secretary of Homeland Security, Kiersten Nielsen about the now infamous Immigration reform meeting that occurred last Thursday in the oval office. During that meeting, President Donald Trump is said to have used S--t hole (or is it now S--t house?) in describing certain black and brown-populated countries.

Many Trump supporters on social media, once again, are calling the Haitian, African, South American comments as just more liberal PC and hate coming from the President’s antagonists.

Perhaps it is PC to them. But more than anything else for those not bothered by a long trail of hateful, despicable comments by Donald Trump is the simple fact, we once again, are witnessing another episode of the Trump administration and President Donald Trump, lying.