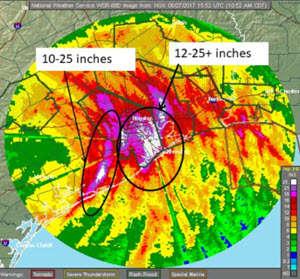 Louisiana Governor John Bel Edwards has issued a statement regarding what is now called Tropical Storm Harvey which is dumping substantial amounts of rain onto Texas, causing catastrophic flooding in Southeast Texas, including Houston.

Here is his statement.

Gov. John Bel Edwards released the following statement regarding the severe weather expected in Southwest Louisiana as a result of Tropical Storm Harvey.  This morning, Gov. Edwards completed a conference call with the South West Hurricane Task Force, which includes officials from the National Weather Service and emergency response officials from the State of Louisiana.

“We’ve just completed our morning briefing with the South West Hurricane Task Force.  This storm is wreaking havoc along the Gulf Coast.  It is critically important for the people of Louisiana, particularly those in Southwest Louisiana, to recognize that we are not out of the woods.  I am asking all Louisianans to remain vigilant and pay attention to your local news.  Louisiana will remain in this storm’s path for the next week, from Southwest Louisiana to North Louisiana.  Forecasts show this storm system making its way closer to Louisiana over the next 48 hours and causing heavy rainfall and potentially life-threatening flooding.  We are closely monitoring this storm system and coordinating with our local and federal partners.

“In addition to making the necessary preparations for this storm in Louisiana, we are in regular contact with our neighbors in Texas.  Already, we have dispatched personnel from Louisiana to assist their efforts, including with search and rescue.  Nearly 12 years ago, Texans opened their doors to the people of Louisiana when Hurricane Katrina devastated our state. Since then, we've turned to them for assistance time and again.  In 2016, Texas Taskforce 1 was dispatched to our state to provide support during the historic floods.  We will do nothing less to support to the people of Texas in any way that we can as they respond and recover from Hurricane Harvey.”

The Louisiana Department of Transportation and Development (DOTD) will update state road closures and provide that information to the public at 511la.org.  The Governor’s Office of Homeland Security and Emergency Preparedness (GOHSEP) will post updates for the public at emergency.la.gov.