Attending the "Give me liberty or give me COVID-19 " rallies? Featured 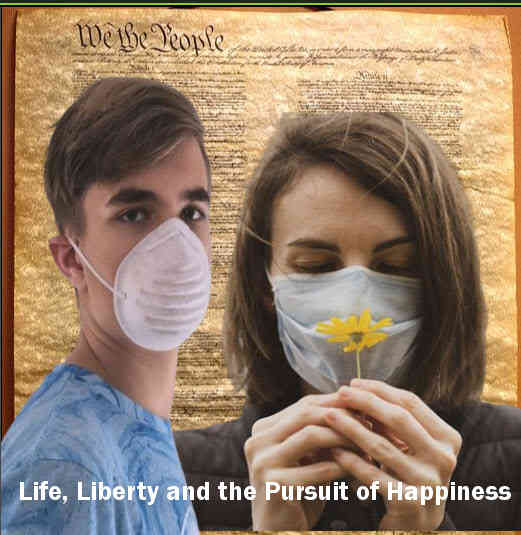 Did you know that those individuals around the United States and locally, who want the national governments to be prudent, follow science and put life before money, are “unconstitutional anti-business, socialists who have destroyed the American economy’?

If you looked around over the past week, you will see these epitaphs all over.  They’re on protests signs, on social media posts, on certain cable networks along with revolutionary-war era slogans such as “Don’t Tread on Me”, “Give Me Liberty or Give me Death”.

It certainly does not help that the unemployment benefits count just hit twenty-six million and some change—all occurring the past few weeks.

Of course, it also doesn’t help when the country’s leader tweets words such as “Liberate” at the very moment some “Open up America” rallies are taking place.

But anger, division, chaos, and accusatory is where this country, city, and state are today. President Trump ignores the shocking images of people, young and old, taking to the streets and capitols many refusing to wear face masks.  Worse, he looks the other way when they brazenly literally and symbolically stand shoulder to shoulder, basically "shooting the proverbial bird" at those who they claim are robbing them of their God-given liberties.

You might see these same folks in pro-life rallies demanding that the government protect life over a woman's proclaimed choice to control her own body.  Yet, when the government takes necessary actions to protect all of our lives from a plague, they call those officials, “dictators”.

This weekend, hundreds of these protestors are expected to meet for a rally at the state’s capitol. All of them are within their own constitutional rights to do so.  If they were to don face masks and ensure a minimum of six feet separation, the risks would be minimized. However, judging many of the comments I have read on social media, that absolutely ain’t going to happen. No way.

Conditioned now for months to believe the Coronavirus is a hoax or, at the very minimum, a way for anti-Trumpers to take down the President, it is obviously these folks have had enough. They are defiant.  Many of them publicly state they are not going to follow the protocols urged by state and local leaders. But, why should they? The very man, leading our national anti-virus effort, hired to protect all of us, has been muted.  He claims they, which are his own base, are engaging in "safe" protesting.

The target of the rally this weekend in Baton Rouge is none other than Governor John Bel Edwards, a Democrat.  Online, quite a number of the future protestors state they will go maskless.  Thinking he wants to keep a lock-down, believing that he is legally demanding that everybody in public must don a mask, they call him a dictator.

While, I personally and strongly believe that at this time of emergency, he has the legal right to demand legal compliance with an order to mask while in public, some of these protestors take the opposite position.  However, for now, this debate is not even ripe.

In an email response to my inquiry today, his office assured me that there are no legal requirements, no mandate to wear a mask. Obviously, he wants everybody to do so but he is not dictating.  Today, during his daily press conference, he repeated his position and said he would be making an announcement early next week about opening up the state.  It appears that he will follow the guideline provided by the Trump task force.  He explained that there is a possibility that he might force employees of stores to don the facial protections, but, that is not his inclination at all. Instead, he prefers market forces to prevail, believing that customers simply will not want to do business with those shops and companies who put others at risk.

All of us want a safe return to a vibrant and vital economy. Just one week ago, I wrote a column stating that this nation lost 31,000 souls to COVID-19.   Today, shockingly, we have climbed to over almost 47,000 in a matter of seven days.  Roughly 16,000 of our loved ones have perished.  Next week we will close in, if not top, the number of casualties in the Viet Nam war, which lasted nineteen years

The vast majority of Americans want a small but visible minority to put life over the economy. Of course, this does not mean our friends and neighbors should lose their jobs or go without food.  Instead, they want our leaders to use common sense and not be bullied into jumping the gun jeopardizing all of us.   They want to continue with social distancing, face-masking, and hand-washing practices and slowly but wisely manage the virus so the hospitals are not overrun and where scientific tests can be deployed.

The Declaration of Independence spoke of this country standing for “life, liberty and the pursuit of happiness”. Yet, dead people have no life, can’t seek liberty, and pursue nothing.

We can win this health and economic battle because we have our own constitutional fortitude and wisdom. We will lose it if our passions overcome our logic and if we allow jingoisms to infect our goodwill.

The choice is ours.