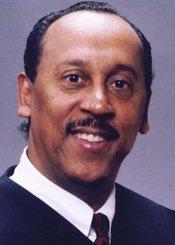 Based upon a new poll, initially published by LaPolitics, the two top male candidates appear to be rising in the polls and two leading candidates, both females, are dropping.

In the Verne Kennedy’s Market Research Insight poll just released, only six points separate three candidates but a fourth candidate is beginning to make a move.

Charbonnet, Cantrell drop in just-released New Orleans Mayor's Race poll--Talk about it below

However, there remains a good one-fourth of the voting public that are uncertain.

At the top of the heap in MRI's poll. (300 likely, Aug.7-8, +/-5.7 percent) stands  the Undecided vote with 26% followed by Judge Desiree Charbonnet with 25 percent, Councilwoman LaToya Cantrell at 23 percent and former Judge Michael Bagneris with 19 percent.  Troy Henry, who has run for New Orleans Mayor twice before has risen to 7 percent.

The prior poll, Charbonnet and Cantrell led with 33 and 32 percent, respectively.

According to LaPolitics’s Jeremy Alford, “Climbing, meanwhile, are Henry, who went from 3 percent to 7 percent over the past month with no publicity, and Bagneris, who has turned the election into a three-way race.”

Kennedy now for years, polls for The Advocate’s owner John Georges and a group of businessmen. 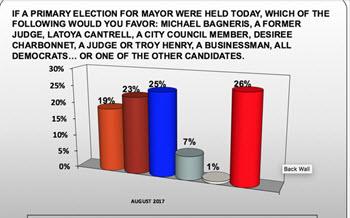 The poll was promoted by public relations firm Brylski Company who works for Bagneris.  In its KrewofTruth newsletter, Cheron Brylski wrote, “The biggest takeaway from the most recent Kennedy poll...is that Cantrell and Charbonnet are losing ground, at a clip of about 5 percent each since July...and Bagneris... has turned the election into a three-way race.”

This year, the vote count could improve due to the competitive field. Two factors might have played a role in the uptick for the two men, although no evidence cites it--the recent flood and for the former candidate Bagneris, television commercials.  Alford, in his article, stated, “In other words, don’t count out Bagneris, or at least his ability to greatly influence this contest. The gradual momentum being enjoyed by Bagneris may surprise some and can likely be credited, in part, to his worn-out shoe leather. (He has even been riding and engaging voters on public buses”

Charbonnet, so far, is leading with camaign cash.

In a recent Bayoubuzz interview with SMOR’s Bernie Pinsonat, the Southern Media and Opinion Research pollster said that he did not believe the total voting in the City of New Orleans would exceed 20 percent.I

In 2010, current Mayor Mitch Landrieu won with only 88,945 voters going to the polls in part due to the fact that the Saints were in the Super Bowl the next day.  In the 2014 election, Landrieu beat Bagneris however, yet only 84,070 voted.  Part of the reason for that reduced turnout was the fact that the election was one-sided with Landrieu maintaining a strong lead throughout the campaign.