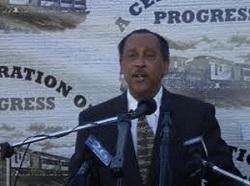 Who makes the runoff in the New Orleans Mayor's race might come down to who wins the young vote.

This is a topic Christopher Tidmore, political writer from the Louisiana Weekly and radio talk show host from WRNO, discussed in the second part of his Facebook Live discussion with me Wednesday afternoon.

In part one of the Bayoubuzz interview, Tidmore said that the upcoming mayor's election could not be more exciting but any of the top tier competitors--LaToya Cantrel, Desiree Charbonnet and Michael Bagneris were basically tied for the top spot with only weeks left to go until voting day.

In part 2, which transcript is below, Tidmore talked about the "young vote", which is comprised not of the 18-year-old and above, but a totally different demography, which has become increasingly more important as the city recovers from Hurricane Katrina.

Below is the excerpt transcription of the above video.  If you want to watch this part of the interview, simply set the video scroll to the 2:52 mark.

Well the obvious answer would be that Cantrell appeals to the youth vote and by youth vote. I'm not talking about eighteen year olds.  I'm talking about young professionals between the ages of 25 and 35 of Millennials the so-called hipsters that have been moving into New Orleans that being socially active--those that may have arrived after Katrina now have young families.  That that's what I mean by the youth vote.  And, Cantrell has made the most obvious appeal to it and at first glance she would say that's one of her core support.   Her entire race being predicated on neighborhood activists-- remember Latoya Cantrell as the former head of the Broadmoor Improvement Association, she was noted for fighting the "green dot" after Katrina-- that's how she built her reputation,  but also on this sort of young professional--what we would have called back in the 80s, the yuppie vote, coming out of it, The Millennials have their own set of of interests and that are a little different in the past.

But I will tell you that when this race started Desiree Charbonnet was pulling a tremendous amount of these votes as well and the reason was she's done a very good job at appealing at young women and sort of speaking to their ideas.  She's very good in a room.  She had a core entre of young female support, and it seemed to be one of her pillars. If you had to describe Desiree Charbonnet's coalition--she's from a prominent old 7th Ward family.  Her brother Bunny Charbonnet, the legend of New Orleans politics, of course, Desiree has won citywide multiple times not just for judge but she was a former recorder of mortages, she's run citywide.  She has the establishment vote in the African-American community in many ways, but she was building up trying to get some of the young vote some of the disaffected vote, some of the leaders vote, even in the white community and it it was seeming that she was going to pull enough of that to not only guarantee a runoff spot but a very formidable position going into winning a runoff.  She certainly had the most amount of money.  That's been changing in the last few the last few weeks.

Michael Bagneris  has also made appeals to the young vote. The kids' vote tends to be sort of the African-American middle class, the older African-American middle class, that voted against Mitch Landrieu, the second time along with traditionally and this is the interesting little wrinkle in this race of how was--the Republican vote--the the white conservative vote it's worth remembering Michael Bagneris has a lot of the support four years ago because he took on Mitch Landrieu and he did it very openly with the GOPS endorsement.  This time, of course, he was the one candidate, he broke it on my radio show--if he can do a shameless plug-- my radio shows on WRNO 99.5, I used to be a reporter there and I now host the Sunday morning Meet the Press show called founders show along with my McHenry,  that also rerun on Monday Wednesday Fridays and WSLA 1560.

On my radio show, he actually endorsed the concept of having a referendum before the monuments came down, and he has pushed this and this has got him the support of Frank Stewart of a lot of the monumental task committee members, a lot of the conservative Republican business--and he looked like a shoo-in to get the Republican vote--in this election.  He's still according to the polls, the latest inside poll, leading on that demographic, but when he went in to get the official endorsement, what's called the Parish Executive Committee, he lost it very narrowly they're closed-door sessions but I had people they told me what happened and it was at the time if you remember it looked like Bagneris was not going to make the runoff and it was going to be a runoff between Desiree Charonnet and Latoya Cantrell, Bagneris was running a very distant third, and so narrowly by one of two votes it went for Charbonnet.  Apparently this hasn't had much effect on the rank-and-file vote, but it's getting Desiree Charbonnet enough support to where she's been able to maintain a pretty comfortable first place by just having a sliver of sort of the Republican leadership and some enough of the white vote to give her a strong position.

That's why I'm saying you don't know who's going to be because a lot of this is fluid and if I had to say it like this--if she's gaining anything, Charbonnet beyond the youth she's getting some young Republican votes, and that's the question the answer part of the youth vote-- because she's made an appeal to groups like the Greater New Orleans Republicans which despite the name is the young Republican group in the city of New Orleans, she's done that.  So and remember Republicans are a minority in the parish of Orleans, it's a very Democratic City, a very blue city, but the white vote and the Republican vote has been the kingmaker vote the last few elections.  Never forget how Ray Nagin won.  He got a sufficient a portion of the black vote and he was crowned by the white vote.  I actually don't think that's going to happen this time, the white votes pretty evenly divided in different ways between the candidates.  I'm gonna predict whichever two candidates gets the most pluarities of it, are the ones in the runoff, because the black vote is also equally divided.