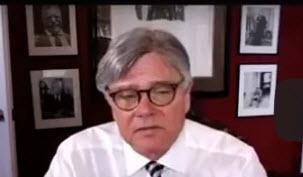 The New Orleans Mayor’s race is a week and a half away and pollster Ron Faucheux, who performed a poll for WWL TV and The Advocate, contends that it is anybody’s race among the top three candidates—Michael Bagneris, LaToya Cantrell and Desiree Charbonnet.  Moreso, with high undecided vote and a tight race, Faucheux believes it all comes down to the last ten days and that the voters are still shopping.

This was the over-arching message in my interview via Facebook Live on Tuesday afternoon.

Below is the substance of the interview of the first six minutes and twelve seconds of the discussion.  The transcript below is an accurate accounting however, make sure you watch the video for the most accurate version.

After the preliminaries intros, I asked Faucheux to give an overview of the Mayor’s race:

FAUCHEUX: Charbonnet is getting 26%, Cantrell is getting 27%, Bagneris is getting 19%-- any any two of the three could still make the runoff, the last ten days of this election I think very important, a lot of others still don't know much about three candidates, and I think they're still learning about them,  so the two candidates that close the strongest I think if the best chance to the runoff births and as it stands now it looks like runoff would be certain.

In terms of how they break down, none of the candidates for mayor is dominating the race. They're all fairly close, none of the candidates for mayor is dominating any voter group-- among women voters, Charbonnet leads, but Cantrell is in second place.   Among men voters, Cantrell leads.  Among white voters, Bagneris leads.  Among African-American voters Cantrell leads.  So you can see nobody is dominating any one category. and when you actually look at the numbers, the numbers are actually fairly close, for instance, in terms of white voters Bagneris is 24 Cantrell has 23, Charbonnet has 22.  In terms of women voters Charbonnet is 28, Cantrell is 23, Bagneris has 19,  so nobody is wiping anybody else out of any of the categories.  And there are a number of other candidates in the race as well, Frank Scurlock has four--rather 2%, Troy Henry 4%,  Tommy Vessel 2% and everybody else  was less than one-percent.

SABLUDOWSKY: So the undecided total including, say Troy Henry and Scurlock it makes up about what percent if I might ask?

FAUCHEUX: I mean the underside is about 18%--if you if you count the more minor candidates into that, you have 28 percent of the voters, who are not voting for any of the three major categories.

SABLUDOWSKY: So I'm just kind of curious--basically Bagneris is about what six seven points behind the leaders

SABLUDOWSKY: So, I'm wondering and I know that you mentioned this in terms of numbers but--why is it that he is that far behind

FAUCHEUX: Well based on most of the polling, he's he actually seems to have the momentum in the last couple of months, there were some polls that showed me at six, eight, ten, eleven percent a month or two ago--he's now at 19 percent.   So it seems that he is come up and it doesn't necessarily show that the other candidates come up--so even though Bagneris is in third place, it does look like he handling well over the last couple of months whereas the other candidates are roughly where they started from--particularly Cantrell.  At first Charbonnet wasn't that well known she came up some time ago, but but we but at this stage of the game, I think I think there's enough undecided votes and enough uncertainty that any two of the three candidates will still make the runoff.

But it's all going to depend on the last ten days. We're dealing with three candidates here who are not necessarily household names in the city,  they may have not run big loud controversial campaigns, they haven't been attacking one another, they're not tied into controversial issues, so so because of that a lot of voters i think are still shopping