The secrets behind the NotforsaleNola.com PAC which emerged last month to defeat Desiree Charbonnet has revealed its donor and expenses with the State of Louisiana Ethics.  The PAC put up a website and sent out political mailings for the sole purpose to defeat Charbonnet for Mayor of New Orleans.

For over a month, the political buzz has been who are sending out those mailings and who is responsible for the website that attacks Charbonnet for alleged corruption.  While in no way definitive of any direct association, $70 thousand of the $190,000 (35.8%) raised to fund the anti-Charbonnet campaign, came from donors who also contributed to Mayoral candidate, Michael Bagneris.

Connection between donors to Notforsalenola.com PAC and Bagneris campaign? Discuss below

There is no record of a contribution from either of those two individuals to Bagneris.  Cheron Brylski who currently handles Bagneris’s public relations was the public relations person for Jacobs’s 2009 Mayoral run before she dropped out when current Mayor Mitch Landrieu jumped into the race.   Brylski also has had a close relationship over the years with Jacobs, although, in the world of politics, former relations do not necessarily guarantee present or future support for the same candidates or causes.

Part of a Facebook conversation outlines the difficulty of drawing connections between campaign, contributors and SuperPACS and pinning the contribution tail on any donkey. 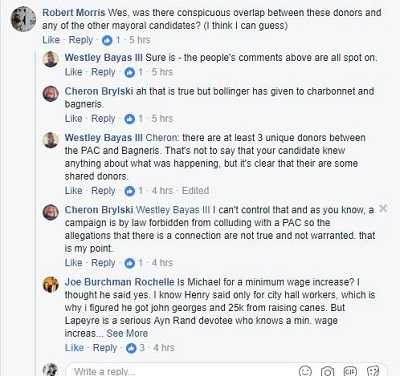 Here is the way The Advocate broke down the numbers and the relations:

Chief among the group are charter school advocate Leslie Jacobs and Lane Grigsby, a Baton Rouge businessman who has funded conservative campaigns over the state's public school policies. Each donated $40,000 to the effort to defeat Charbonnet.

Jay Lapeyre, head of Laitram LLC and a major player in the Business Council of New Orleans and the River Region as well as the wider business community, gave $25,000. Stuart Phillips gave $25,000 as well.

Mohamad Motahari gave $10,000 through his company, WTD Publishing. Motahari works for Frank Stewart, a prominent businessman who has supported candidate Michael Bagneris in the mayor's race.

Lapeyre and Bollinger are also backing Bagneris in the race.

Bollinger, oddly, has also given $5,000 to Charbonnet's campaign.

William Goldring, who made his fortune through the Sazerac Co., gave $5,000 through a company he owns, as did Paul Fine, who has worked with Goldring for years.

The group's financial report confirms rumors that have been circulating for weeks about the general contours of the group behind the PAC and its attacks on Charbonnet.

Charbonnet in fact mentioned Jacobs by name last week when asking Bagneris to swear his campaign was not involved in the ads. He said it was not.

Bagneris has denied any connection to the group.

Also, to date, while the contributions were heavily loaded among Louisiana entities and political players, over $101,000 in expenditures have been documented with the Ethics Board and other than $2,000.00 paid to Pelican Blues Strategies of Shreveport, all other expenses were to out of state vendors, including Facebook and Adobe.