Landrieu's New Orleans Mayor race endorsement debate is over, the other winners are Featured 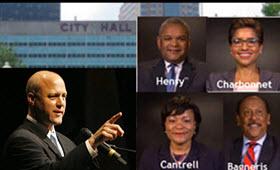 So the  New Orleans Mayor’s Race endorsement debate is over, at least, that controversy which has occupied the minds of many speculating who two-term Mayor Mitch Landrieu might support to replace him.

Yesterday Landrieu formally decided not to support any candidate for Mayor of New Orleans, as he released his endorsements, which did not include the position of Mayor.

Many political insiders believed that he would be endorsing either Desiree Charbonnet or LaToya Cantrell for Mayor, but decided to sit it out.

Landrieu has taken his hits recently as the decision on the confederate monuments removal have angered many in the white community.  Also, the recent botched Sewage and Water Board flood maintenance situation has caused further embarrassment.

It is likely that Landrieu will stay out of the endorsement ring should a runoff occur, as the two top candidates in most polls are Charbonnet and Cantrell are favored to be in the runoff.

Today, Mayor Mitch Landrieu announced his endorsement of candidates running for office in the upcoming municipal elections.
Mayor Landrieu said, “We're making a lot of progress, and New Orleans is headed in the right direction. There's a lot more to do, so I look forward to working with these candidates to continue to move New Orleans forward together.”

"Helena has been a great champion for our city and important causes such as opioid policy, equal pay and domestic violence prevention in the Louisiana Legislature," said Landrieu. "She will be a strong member of the Council and will bring new ideas to City Hall."

Landrieu said, "Jason has been a strong, progressive leader on the Council on the issues of reforming the criminal justice system, advancing economic opportunity for our communities and adapting to the sharing economy. He has the ability to bring people together to move New Orleans forward.”

"Jay Banks knows District B like the back of his hand," said Mayor Landrieu. "From his longtime service in City Hall to his deep roots in the community, I know Jay to be a hard-working public servant who will move our city forward."

Mayor Landrieu said, "I have worked with both candidates during their time on the Council and can say that Nadine Ramsey is the best person for the job. She will great partner and constant fighter for her district and our city. We're making a lot of progress in District C- from new development in Algiers to a new riverfront on the eastbank. It would not be possible without the partnership and persistence of Nadine. She deserves our support to keep the progress going."

Mayor Landrieu said, "Councilmember Brossett has been a champion of issues such as a living wage for City contractors and new development for his district. His re-election will keep District D moving in the right direction."

New Orleans Mayor's Race--Who will be in the runoff? Tell us below

Mayor Landrieu said, "District E has a great advocate and leader in Councilmember James Gray. He has been a great partner in moving District E forward. He has also helped move the city's efforts forward on recreation, where we recently got national accreditation. And he has been a staunch proponent of our work around DBE participation and improving workforce development. We have a lot in progress that will propel more growth and economic development for New Orleans East."

Orleans Parish School Board Millages A, B & C Renewal

"There is nothing that we are doing in New Orleans that is more important to our future than continuing to improve our education system," said Landrieu. "As our schools unify under local control, the renewal of these millages are critical to funding the basics of our education system. It is not a tax increase.The results are clear, and we have to keep improving. We cannot turn back the clock on our students."